This is gonna end tomorrow. Just a quick note.

The Oblivion III, a certified big boy.
It does use RR blocks and unstable blocks, but still usable in latest unstable multiplayer. Please let me know if this is not allowed.
Workshop link:
https://steamcommunity.com/sharedfiles/filedetails/?id=2138969134
Reactions: Aardvark123 and Matt
B

Here is my ship! the theme is pirate. also lemons. hopefully the link works as its the first time I've posted a workshop link.

It's supposed to loosely resemble the HSV-2 Swift (with my own creative liberties of course!):

P.S. Hey moderators could you approve my brother @J623's submission please? He's put a ton of effort into creating his battleship and he'd really like to participate! His post is still waiting for moderator approval. Thanks moderators!
Last edited: Jun 23, 2020
Reactions: GK vec, AlexAtheos, Aardvark123 and 3 others

Participate in the challenge

This massive thing is designed to be big and that's it, many guns on the underside, no maneuverability. Has a bridge and is vaguely ship shaped so here goes my strange trapezoid!

our battle ship is ready at last!
Reactions: Aardvark123 and Matt 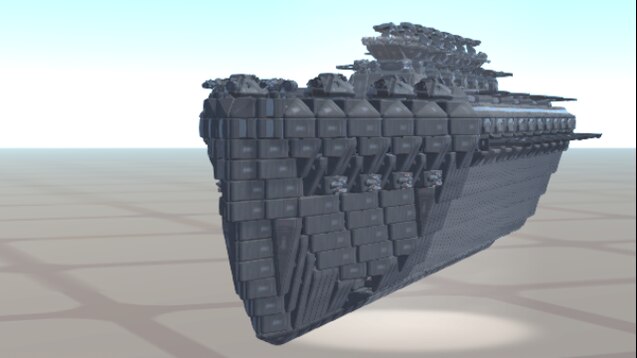 wait I forgot to paint my tech properly. it will be fixed as soon as possible.
Last edited: Jun 23, 2020
Reactions: Matt and Aardvark123

So many fantastic entries - Really looking forward to watching the replay.
Anyways, here is my submission.

Change of plans! My first ship has been used for scrap!
Here is my new entry; the USS Yeet MK2!

It is spposed to look like one of those Submarine-Boat hybrids you seen in movies. (can you see the "propeller"?)
I truly tried my best to make it look good. It uses the Hawkeye Spec Op Skin on the workshop an the GSO Cross Corp skin on the workshop.
Reactions: Aardvark123, Matt, Darkstar076 and 2 others

here's mine. I tried to make the USS Iowa as best i can and still have some things from terratech and solar panels and other things that also help in campaign

I couldn't possibly let a naval event slip past me like this, so I've prepared a fine ship which takes advantage of the AI's tendency to amble around its target and fire a broadside. Named the HMSF Indefatigable, this fine warship takes a page out of old naval tactics in that nearly all of her heavy armament is located on the broadsides, ready to give a wallop to any foe who dare pose a challenge, all while incorporating my signature ship style! This vessel also abuses the absurd nature of the GeoCorp Megareactor Battery (Least dense of all the batteries while being extremely light, and having the highest energy density and not exploding and is cheaper than 16 HE or 4 GEO batteries in the same size... seems really OP to me, buffing the energy capacity was probably a mistake, which I will probably bring attention to in the future), while having a well protected cab.

Costing $BB 9,994,629 means she skirts the limit, but she'll bring the pain to any ship of similar size or cost, I'm on the fence about some of those chunky geo builds though.

This is called the Hyperionought, link to my Steam workshop page:

Reactions: Aardvark123 and Matt
B

Here is my submission for the challenge!
Note: The anti-gravity makes it float high when it is powered, but it does comes back down
Click Here for Steam Link

Oh boy am I cutting it close...

I present the Macross SDF-1

hi. This is a ship I made, "Kaga Kai 3". The reason why it is Kai 3 is that it is improved 3 times from the original shape of the ship I made earlier. The name "Kaga" is taken from a Japanese Navy undersea ship (which was later converted into an aircraft carrier and used). Should be within the price range...
https://steamcommunity.com/sharedfiles/filedetails/?id=2038348980
Reactions: Matt and Aardvark123