So, I wasn't a fan of the (over) simplicity of load tech with "Send to Inventory" functionality, when it was new. But given that we have it, and it smooths out game play, why not take it to it's logical conclusion?!:

I think this should also be tweaked to preserve the battery charge currently stored in the tech (as much as can be held by the new one). Note this shouldn't be be overly overpowered, because you'd not be able to load in your massive brute, fully charged, straight from a top speed transport jet. But if you built additional batteries into your explorer craft it would give you a little running start, that would make re-engaging in combat far less disjointed.

Also, I'd love this just for the expanded menu with this type of loading, that lets you actually see a decent fraction of your techs without hunting up and down endlessly. (But no reason the other type of loading can't have that anyway.)

My expectation is that tech replacement loading has likely been kept out of the hands of the mainstream campaign players due to it's liability to cause tech intersection and therefore hard crashes. Yes? So, presumably, once the load tech at mouse pointer functionality has more more detailed intersection avoiding mechanism, you'll be able to add this in too...?
Reactions: AstraTheDragon, MrTwister and Boomik

Oh, and another killer app for this could be in 'repairing' missing parts, e.g. on fairly big techs that are prone to loose a bunch in fights.

This might even help make Regen Bubble defence more viable, in place of always having shields - if partially ablative armour can be quickly restored (after a fight) from an inventory stock of cheapish blocks (while retaining battery charge). Bit of a new, alternate meta.
Reactions: AstraTheDragon, MrTwister and ilikegoodfood

I agree, but to really balance things out, all inventory operations should only be allowed within an active SCU area of effect.

Furthermore , each active SCU should have maximum throughput in mass units per minute, so you have to use multiple SCUs to load big techs quickly (or face lengthy preparation/cooldown otherwise)

Furthermore, there should be electricity cost for each block retrieved from inventory directly proportionate to weight/mass of each block.

This way there will be a strong impetus for all inventory management to be done near active bases or support techs.

You will also require larger bases to load larger techs. Also loading charged not such a great idea - for balance, better like it is now.

What do you think guys? Zero?


P.S. and to make it easier at the beginning and to allow baseless access to inventory too and basic tech loading - trading station SCUs can also provide bandwidth-limited access to the inventory and some free energy to load blocks.
Last edited: Nov 21, 2017
Reactions: BenBacon

I wondered if consoles may have in-place loading in campaign, via their current tech UI wheel interface: 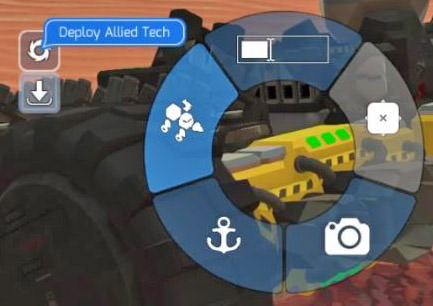 Although in today's steam Zeena and Anton said no. But they didn't actually try to click the [Down Arrow] button...

Replacement loading would be extra-useful on consoles, with their block limits meaning you want to keep your number of techs to a minimum. Circumventing the need to load tech, switch tech, unload tech, each time.

At any rate, it shows that it would be easy to implement the thread's suggested feature, with the UI already in place on console. Maybe it would make sense for PC to get this new UI style, too..? (Instead, or as well as, bottons in the bottom left of screen.) @Jamie @higekun?
Reactions: Galrex and AstraTheDragon

Yorkshire Dales under a rock.

No and in all honesty I'd much prefer them to replace that loading tech from inventory to something a little more involved. I like the fact that I can store stuff into the SCU, it semi makes sense, but loading stuff in? Less so, being able to fully replace an existing tech that you're driving? Bonkers (IMO). By personal preference it'd be a block that either just projects the blueprint into the game world that you can then build into. Or the same that the game then builds (which wouldn't be that much different from loading a tech TBH) but would slow down the process of building down.

As for the repair I'd like to see either a "weapon" that uses something akin to the TA Nanolathe repair techs up to their blueprint (+changes) or auto snapshot as a separate process that consumes resources, rather like the welder in Space Engineers. Regen would be for in combat to repair existing blocks, repair beam would be to replace blocks quickly (speed based on complexity/rarity) to get you into combat quicker.

But that could be because I do 90% of my building in Campaign mode and have pretty much got to the stage of clearing out most of my snapshots between Campaigns (I just keep one or two iconic designs).

Using replacement tech loading I would like to see a pseudo-repair tech function. And I don't mean repairing damaged blocks, rather replace missing blocks when reloading a tech.

If blocks required are absent from the inventory, it should buy them in a manner somewhat similar to the death GUI. It should ask for confirmation if the cost exceeds a certain amount of Block Bucks, to avoid trying to repair techs missing many missiles, resource blocks, payload terminals (basically anything absurdly expensive) and completely draining one's bank account.

In order to prevent this from being abused, it would only be possible to rebuy blocks missing from a snapshot through reloading it if you are already controlling that snapshot. (Albeit slightly damaged.)

If this was considered OP, I would suggest nerfing it by adding a factor to the cost of every block required but missing, resulting in inflated prices compared to buying them from a Payload Terminal/Trading Station.

The devs were talking about "tech hot swapping" during the launch day stream (at 03:32:48). @TheFuntastic (Coder Peter) said he'd already prototyped this, using number keys to speed dial favourite techs, and it was working quite well. (Albeit with some unintended tech intersection consequences.)

I think that could be pretty slick: Terra-Transformer-Techs. (Depending on retaining charge or not.)