Welcome to my repository of biomes!​
This is where I will likely be posting the custom biomes that I make.

All of these WILL require the Nuterra Biomes mod by Exund (find it in TT Mod Manager).
Also, thank you to Exund for making the mod that makes these possible.

Thank you and have a nice day!
Reactions: kriskelvin, Exund and Aardvark123
S

Attached is the first file I've ever made for this game: The Titanite Expanses Biome. This was more of a test to see if I could actually figure out how to make a biome. (I spent the last week and a half or so testing and making about five biomes that failed. This is the first one that works.

The lore for this is that the ground in the area was formed deep within the earth and was thrusted to the surface by geological activity many millions of years ago. (I have a volcanic biome planned, so that might be what made it happen. Volcano biome might take anywhere from a few weeks to a few years to finish. I want to change the sky in the biome, and it doesn't load the biome when I do.)

Resources on the Titanite Expanse include titanite and celestite. I'm not sure if I added some carbite as well, but if I did, it is not in abundance.

Above is what it looks like. (Yes, I feel it looks ugly, too. I expect to get better at making these as time goes on. I might decide to update it then. Also, there will be a fix coming up so you don't spawn in it. Fixed.) Attached below is the file. Thank you and have a nice day.

Update: Still working on some biomes. I have tried multiple times to do the volcano biome, but each time, it doesn't load (I've spent 20+ hours trying to figure it out, to no avail). So, I will upload that one when it's done. In the meantime, I have been doing a snow biome. I still need to find some textures. It's not quite ready for a sneak peek. I am about as done with it as I will ever be. And I might will upload it before a sneak peek.
Last edited: Jun 19, 2021
Reactions: YaYYeeT and Exund
S

Attached is the snow biome I made. I'm going to upload it knowing that I might come have already went back to it and updated it (update was the textures, they previously looked too repetitive, so I changed the blend map so they now look less tiled and more randomized). In the meantime, ideas for biomes are greatly appreciated.

This is what it looks like. As you can see, it's a large, sprawling mass of snow-covered hills with the same terrain objects as the glacier biome. It tends to spawn near the vanilla glacier biome and close to spawn when a new game is started and this biome is loaded and enabled.

Attached is the biome. Thank you and have a nice day.

I have made another biome. This time, it is a dried-up lakebed. I kind of just wanted to have a biome as flat as the salt flats, but right next to spawn so I didn't have to travel so far to find a place I could build a sprawling base.

I feel like the salt flats formed from a dried-up body of saltwater because salt flats on Earth occur near salty bodies of water. It would make sense if freshwater had similar rock formations due to erosion, so I made the ground texture look cracked, like how mud sometimes looks after it dries in the sun on a hot day. (Ignore the fact that the data files look like I tried to place grassland rocks with desert clutter... I think I know what I did wrong, but I don't think I'm going to fix it because it works well for its purpose, and I believe the lore works for it as well.)

Attached below is the biome file. Above is what it looks like. Thank you and have a nice day.

what about a biome with lots of ignite, rodite, shroom trees, and luxite, kind of like the pillars biome but 1. without the pillars, 2. flat-ish, 3. with actual seams.

kind of like a nuclear wasteland
Reactions: SatanGirl666
S

I managed to compile a list of terrain objects in this game. The biome mod uses the names that the game's code uses, which don't match the names that appear in game. If anyone wants to add objects to their biomes, they will need either the exported biome files (go in game, press ctrl+L to export all everything you need (vanilla biomes, map generators, groups, and texture layers)). I'm posting it here because it could prove useful if anyone else decides to make custom biomes.

This spreadsheet should have all the terrain objects I have found so far. 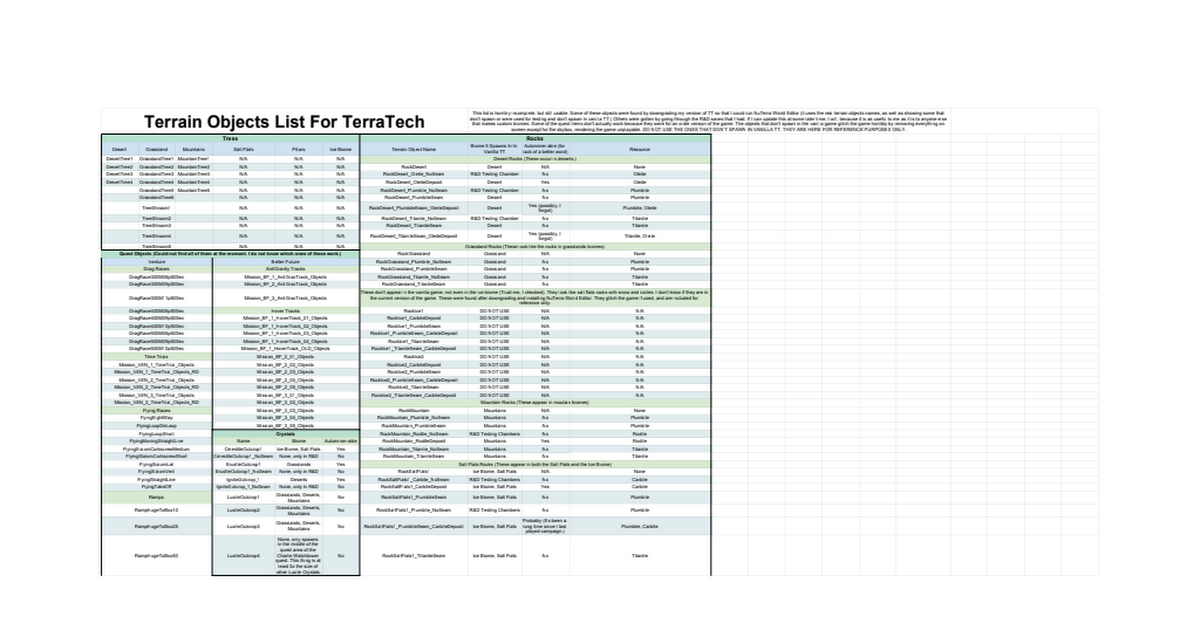 Sheet1 Terrain Objects List For TerraTech,This list is horribly incomplete, but still usable. Some of these objects were found by downgrading my version of TT so that I could run NuTerra World Editor (it uses the real terrain objects names, as well as showing some that don't spawn or were used f...

totally anonymous said:
what about a biome with lots of ignite, rodite, shroom trees, and luxite, kind of like the pillars biome but 1. without the pillars, 2. flat-ish, 3. with actual seams.

That sounds like a great idea! I will see what I can do.

Basically, what I'm saying is that my understanding is that you want luxite and rodite in the pillars-style resource spikes, and you want them to spawn seams when destroyed. I don't know if that can physically be added without having a separate object inside the spikes, but I can likely make one with salt flats-like topography, pillars biome textures (or custom dirt or sand textures), mountain rodite that spawns seams, shroom trees, and large luxite crystals (like in the center of the charlie watchtower mission's area, it's a luxite crystal that's 3x the size of any other) that are not autominer-able (as in, they don't spawn seams when destroyed).

Also, if I ever figure out a way to add those things in, it seems like great idea to either release it as a separate biome, or update the one spawned from your idea.
Last edited: Jul 2, 2021
Reactions: totally anonymous and harpo99999
V

where do i place the file?
S

totally anonymous said:
what about a biome with lots of ignite, rodite, shroom trees, and luxite, kind of like the pillars biome but 1. without the pillars, 2. flat-ish, 3. with actual seams.

Update: Still hard at work with this. I have this weird glitch where the rodite is not spawning but its particle effects are. And nothing else is spawning. Also, the sky is always black. It's given me a few ideas for other biomes spawned from that same mistake that I am having difficulty pinning down.
Reactions: totally anonymous
S

Sorry for the long wait, but I had encountered so many bugs (most of which got fixed) that I had to start over twelve times just to fix them all.

The Wasteland Biome. I may or may not eventually update this, but for now, I've given up on trying to make this the way I want it to be. Literally spent the past month on this, and just yesterday was it releasable. It turns out rodite REALLY hates to be scaled. I did want there to be resource spires with seams, but it turns out that that is impossible to have for luxite and rodite, and spires don't give seams. Those objects don't exist in the base game, and I still don't know if it's possible to make new terrain objects.

Known bugs: Ignite is difficult to mine, and trees become invisible when you get too close. If someone wants to fix it, go right ahead. I'm not 100% sure I will fix it in the future.
Updates Done/Planned:
Fixes done: Ignite has been replaced with ignite spires. Issue seems fixed.
Fixes planned: Fix trees once I can figure out what causes them to become invisible.

I have made another biome. This time, it is the Frozen Lake biome.

It makes sense for this to spawn near ice biomes.

In testing, I found a flat area composed of patches of salt flats and frozen lake biomes that took 45+ minutes to cross at roughly 60-70 mph. In a more or less straight line. Without any other biomes enabled.

Attached below is the file. Thank you and have a nice day.

VDBee said:
where do i place the file?
Click to expand...

Sorry for the long time to respond, I actually didn't notice your response. It might not even have appeared on my screen. I've had this page open for weeks without refreshing or closing my browser. Just because I knew that I would need this page again to post.

You want to first install the mod Nuterra Biomes. This will give you the required files for this mod. You want to unzip the file in the folder called "Custom Biomes" (without quotes). For Steam versions of the game, this is Program Files (x86)/Steam/steamapps/common/TerraTech/Custom Biomes.

Once that's done, you'll probably have to start a new campaign or creative game to make the biomes appear. On the screen where you can change the seed, select "Select Biomes", then turn on the biomes you wish to be in the world. The seed can be anything you want, or entirely random. It does not effect the presence of custom biomes, only where they are.

If you ever update a custom biome, it would be best to start a new game.
Last edited: Thursday at 8:58 PM
S

I have made another biome. The Forest Gorges biome.

It is a bunch of tall, grassy mesas with deep, grassy valleys between. A well-made tech with enough grip or thrusters should easily be able to scale the nearly-vertical sides, so long as the center of gravity is low enough. Alternatively, you can build bridges between the mesas, if you really didn't want to fly over it. Should add some variation to the terrain of grasslands biomes.

Also, I am including a link to a drive folder with all the biomes I will make due to the maximum upload limit on the forums. In it is a file called "AllBiomes.zip", that contains all the biomes I made so far. Before installing the "AllBiomes" file, you should delete any of my biomes you have downloaded, as they will likely replace the older files, but still be in a different folder. In that file is a group that allows you to turn on all of my biomes at once with one switch. It'll appear as "SatanGirl666's Biomes in game, but will likely be cut off due to the UI.

Here is the link to the drive folder. The biome is in the folder. Thank you and have a nice day.