Figured I would make a thread to share my in-game creations after seeing how well received my Tech grinder has been.

My first Vtol, a pretty basic drone. This was my first foray into the air and I used it to hunt and kill many packs of huge techs, even tho it often took a looooooong time lol. 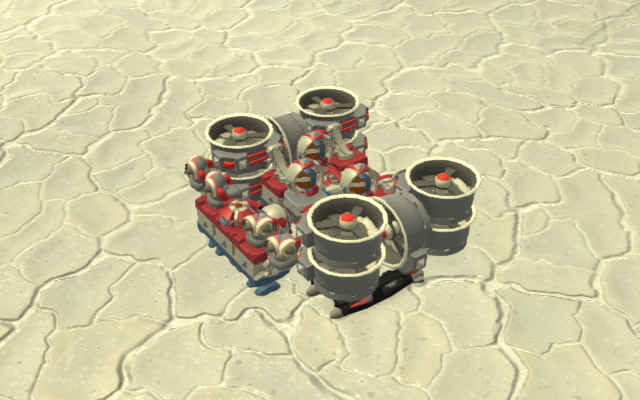 This is my first attempt at a Vtol that had a decent aesthetic to it rather than the standard drone. Uses steering hovers as the main source of propulsion. The triple stack wings have the interesting effect of slowing descent to about 1 meter a second for this reason I refer to this version as the scout version. 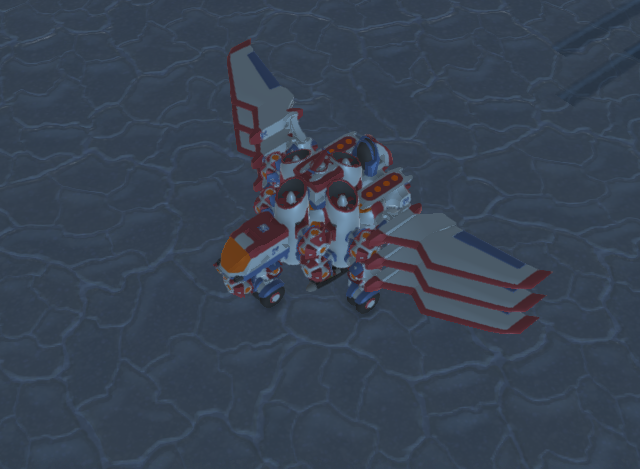 This is my "Combat" version, the only real difference is that the wing config makes it a bit more agile. 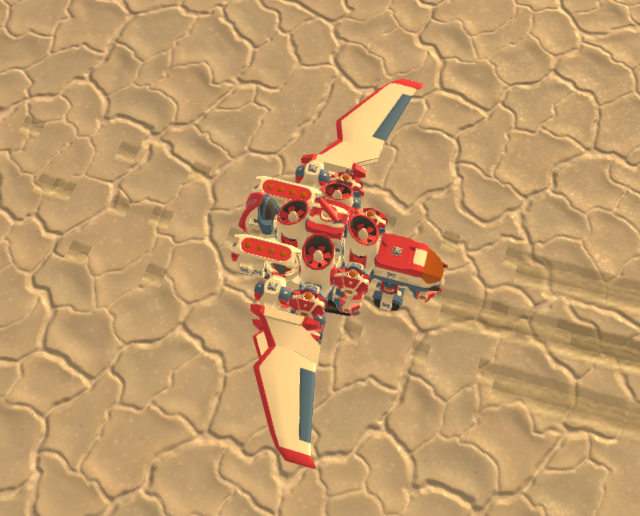 Next is my first build using Hover bug tech, used the core of the above craft as a starting point and added a hover bug engine in the center. The speed is really nice since it does not have to rely on steering hovers for propulsion. 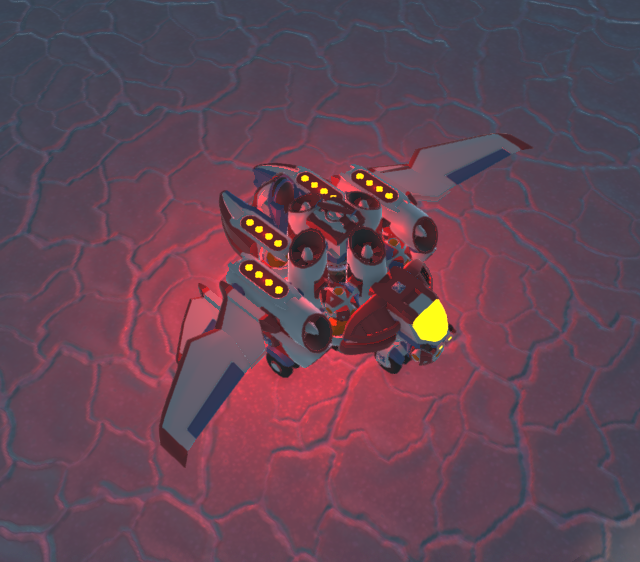 Next, I used to the core from the above tech to make a Hawkeye variant. I found Hawkeye to be almost to heavy and the resulting tech does not handle as well as the original but is still serviceable. 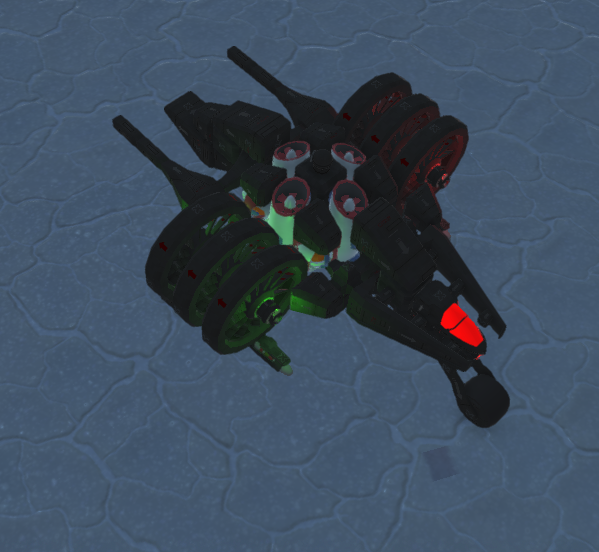 With the second version, I sought to address the power to weight issues by redesigning the core to use HE blades. Overall it works well and still retains a decent aesthetic. 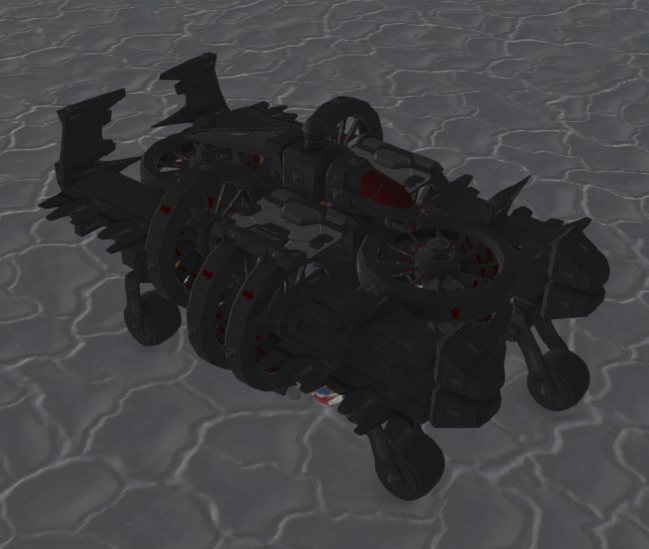 This is a larger Hover bug engine Vtol. I really like how large you can make Vtols with HB engines when you use venture parts since they are so lightweight. I really like how this one looks, very much like a spaceship destroyer lol. 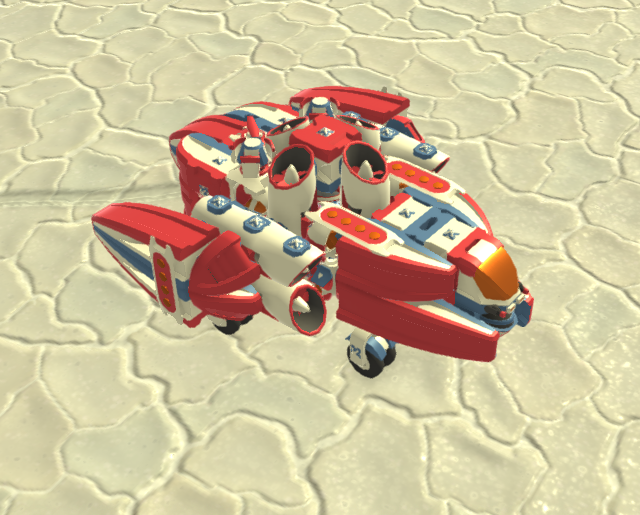 Another Hover Bug Vtol using a different core. This is the fastest of my HB Vtols and has no landing gear so instead uses build beam to land. One of the benefits of using a Hover Bug, even an inactive one, is you can activate the build beam at any height. I like how the look of this one came out. 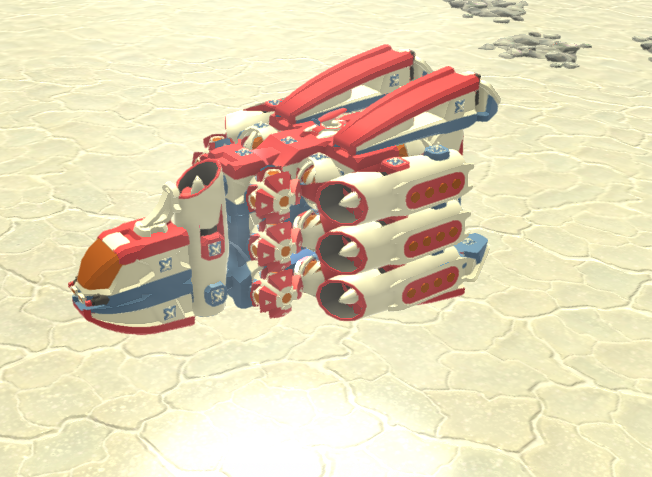 This is my first attempt at a controllable hover. I was inspired by some of the stuff I found on the steam workshop and tried to make a workable version. I used downward pushing Hover Bug engines to try to stabilize the jumpiness but it did not really work. What the HB engines did do was allow ground controls even when the hover jumped up too high and this vastly improved control. 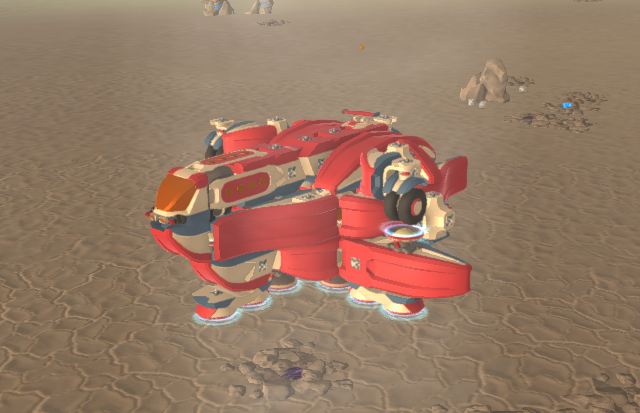 My second try at a controllable hover is my GSO Hover Tank. This is MUCH heavier than its venture counterpart and makes use of rockets on the rear for speed. For this model I tried to enclose all the hovers except for those at the front which are lower in order to catch the nose and keep it off of the ground, this makes the hovers much more protected from damage overall. 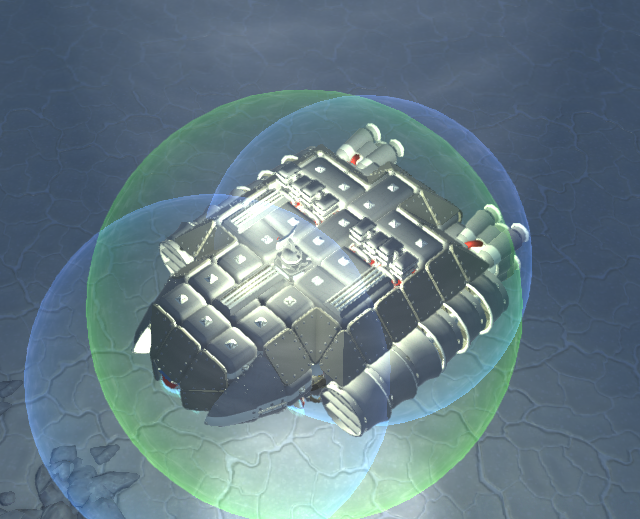 This one is a ground unit and really I just went completely for looks with it. This is the GEO Battle Tank in all of its glory. Has a super exaggerated cannon and separate track pods. Despite being a fun vehicle built for looks it can still brawl pretty well and the GEO parts soak damage nicely. 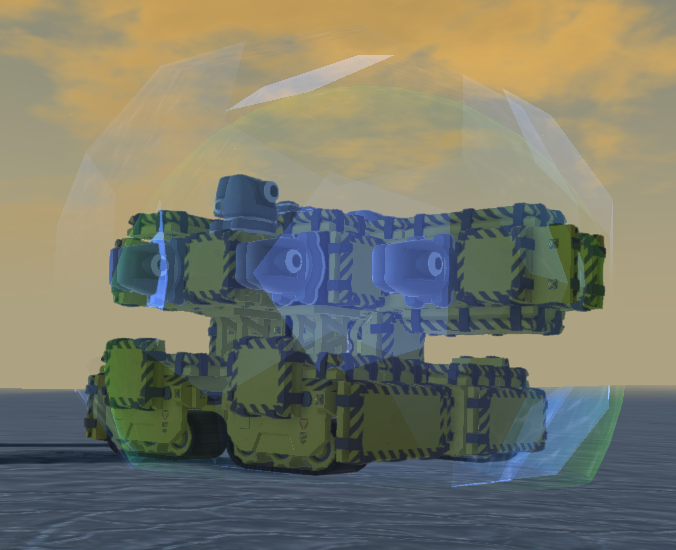 Another fairly stock standard ground gun platform, the Sierra Landship. Has an interesting look to it overall. Lots of guns, batteries, and shields XD. Used a single battery in the back as my battery indicator before they added the actual GUI part for that. Additionally, this Tech mounts a Venture repair bubble in the front center where most of the incoming damage will focus. This tech was mostly replaced by the Bolo MkI. 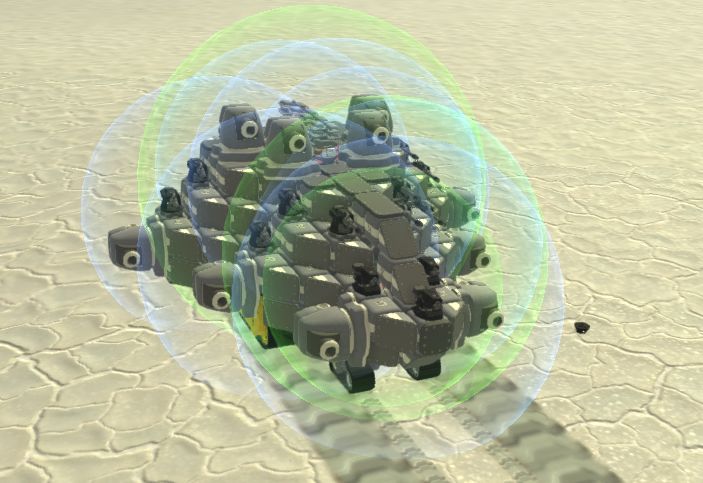 This land brawler was the result of a sojourn into the wilderness and I built it only with parts I found on my journey. The Bolo MkIII has been upgraded with HE batteries, a mobile generator for on the go charging and a set of solar chargers to speed up recovery after a hard battle. Just like the Sierra Landship, it mounts a venture repair bubble in the front center to quickly repair damage where it is most needed. The MkIII has a primary complement of Railguns supplemented by Megaton Cannons. Often the Railgun spam can punch into a cab and kill a tech quickly. Overall nothing too special as everyone builds one of these Hawkeye badasses eventually =D. 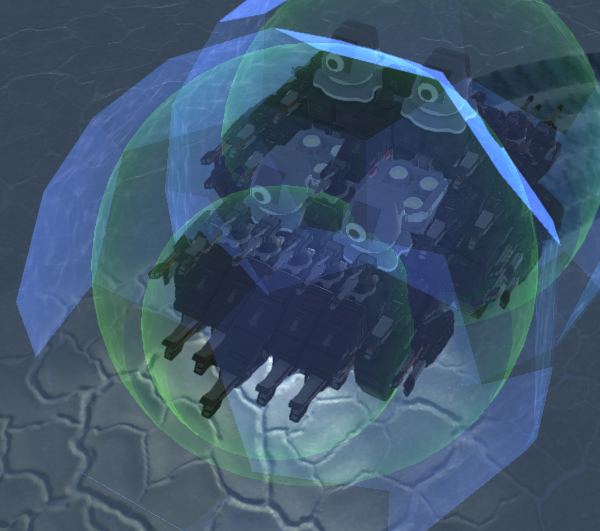 For my most recent campaign playthrough, I ended up with this as my all around tech and I upgraded it into a battle-focused Tech once I no longer needed an all-around tech. Uses Plasma Cutters for ramming into the side of larger techs as well as my usual mobile chargers and front mounted venture repair bubble. I remember wanting to build something other than a Hawkeye monstrosity for this playthrough and I think it turned out pretty good overall. 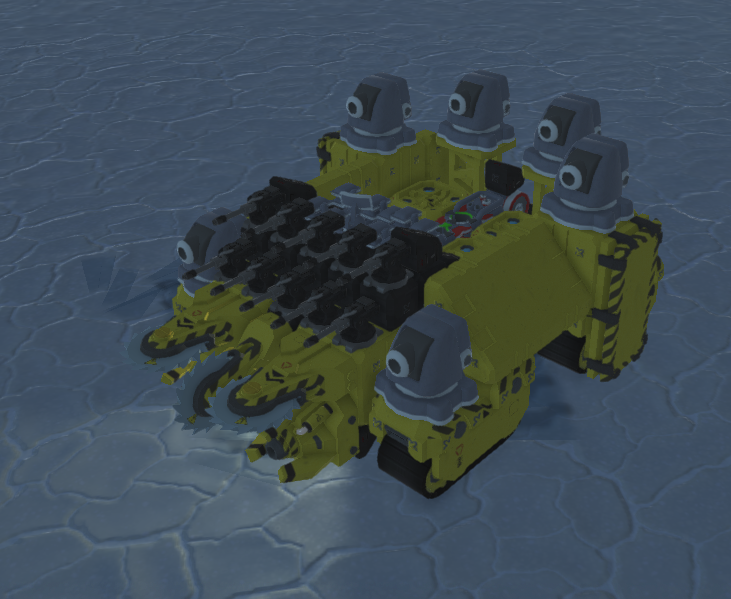 This is the Grinder Swing Arm v1. This along with a ring of turrets allow you to create an automatic tech grinder. Has the second cab on the end, just remove the one block and wiggle it down till it is set in. Overall this is the same as the prototype but with a more interesting construction.

You got some interesting looking hover and VTOL techs there. Will you (or have you) put them on the Steam Workshop? Marginally easier to pop them all into Creative and more people might get a chance to see them.

Welp back after a hiatus, I always come back =D. I wanted to play the new missions, especially the Spider King mission. The mission took a long while to get it to populate but I got it after a bit. Scoped him out, and decided that for his crimes I would not kill him but instead, I would imprison him lol. This has the benefit of letting me farm his flies for money and parts =D. The pics are of his prison and the two farming bunkers! There are 2 bunkers with AI to fire the cluster missiles, I sit in a GSO cab snuck up against one bunker to keep them spawning lol.

A series of drones, one per Corp. First is the Venture Icarus which is also my favorite in general. All 5 drones are also on my steam workshop. hope to hear what you think!

Next is the Better Future Astra drone.

And last the GEO Grader B

Saw the Borg cubes made by NightbladeGreyswandir and PAJ329 and was inspired to make my own Mini Borg cube. Uses the same controls as my other drones, the arrows on the top in the armor patterning help keep track of forward. Has 2 cruise missiles as armaments.