From what I know, you can adjust the water height in the water mod and make water worlds with the mod. I have tried this and it can flood the entire world higher than the mountaintops.
Reactions: Lord Zarnox

I did not know that... how exactly do i change that setting?

QuackDuck said:
From what I know, you can adjust the water height in the water mod and make water worlds with the mod. I have tried this and it can flood the entire world higher than the mountaintops.
Click to expand...

Come to think of it, it should be renamed AquaTech.
Reactions: Soviet_Samuelson
H

the water level is already adjustable, just press the '/' key and then adjust the slider to the right to increase depth
Reactions: Soviet_Samuelson and Lord Zarnox

Exactly what it says on the tin. Create duplicate blocks that are n times more than their original in all functions (Except maybe projectile count), where n is an arbitrary number set by @WhitePaw2002 .
i.e. 5x VEN Seraphim Nose Propeller, 10x Hawkeye Railgun.
Reactions: Lord Zarnox and Soviet_Samuelson

Now that Pistons are a thing, maybe something like above?
Reactions: WhitePaw2002, Lord Zarnox, Galrex and 3 others

I remember that video. And that game. Its been a long time...
Reactions: Soviet_Samuelson

Ok, I want to join the mods suggestion train and actually win the competition for the most ridiculous, crazy and hard-near-to-impossible mod suggested ever.

But I come along with this because the campaign, well you know, it is a little bit bored after a while, not exactly bored, but feels a bit monotonous to be more exact. So, what about a mission editor?

I know nobody is going to even try this, so no offense taken at all if this suggestion is completely ignored, lol, but idk, maybe there's someone that is crazier than me and have actual skills and knowledge to attempt this.

Would be great to be able to script a chain of events along with some UI text showing up on each step and assigning the rewards that could be from a handful stash of cash or resource to even a supply drop or even a tech, then I'd make these NPCs like Crafty Mike and the Sergeant spawn around and assign tasks.

It would be even more interesting if I could assign a bunch of different tasks for a mission and even my own custom Techs as enemies or allies for each stage or mission, and probably the rewards could be non editable so these are auto-assigned based on the difficulty of each task.

I know I'm suggesting something that might be way too complicated, but well, as a player this is something I'd put a lot of time to compose a story for a custom mission and building up the tasks for each individual mission or even some sort of custom campaign series of missions...
Reactions: Seth_Seth and Legionite

A mod that disables world gravity, and uses rigidbody gravitation to add forces to all non-kinematic rigidbodies.
For fun.

Probably with a button to enable/disable.
Reactions: Galrex and Comrade Commie

Fehn said:
A mod that disables world gravity, and uses rigidbody gravitation to add forces to all non-kinematic rigidbodies.
For fun.

Probably with a button to enable/disable.
Click to expand...

or even a laser mod with new weapons
like the gatlings we can find but they fire high speed low damage laser bolts
or another one that drains energy but powers a long-charging laser that once fully changred deals tremendous damage
or an "autocannon" laser that has two barrels, has a medium-slow rate of fire close to that venture one and shoots an instant-hitting laser

or last one: a rangefinder module:
it boosts every weapon you have in a circle the size of a normal GSO bubble shield, needs twice the power as one and can increase range to 150%
great for bullets with short ballistics or lasers with short reach, even better for shotguns with a 200% range
Reactions: Comrade Commie and Soviet_Samuelson

Yes. For sure. This would do wonders for the water mod, and I would even be interested in modelling some new blocks for it if someone who could handle the "boyancy" aspect wanted to contribute. Great idea @Comrade Commie.

BF hovering omni-swivel: swivles in both axis and stands away from the base of the block at a set distance

y e s. also an alllllll firing arc weapon with one attatch point and is 1x1x1 but packs a pawnch
Reactions: Soviet_Samuelson

This mod suggestion should be pretty simple to implement (I'd think):
I'd love a mod which makes the Tech we are currently piloting "ghosted" or semi-transparent.

Why would anyone want this?

Because it is extremely difficult and frustrating to aim at enemies directly below us, both because the automatic camera adjustment refuses to cooperate and because we can't see through our tech to see the enemies below us: 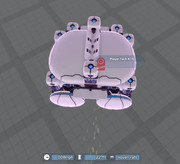 Ideally, it'd be nice to have a keyboard command to toggle the semi-transparency off and on. But this would still be a welcomed change without that. (I can always disable the mod through the Mod Manager - after shutting down and restarting - if I get tired of it.)

I may try to implement this feature in misc mods eventually. If there is a new update for misc mods anytime in the next week or two, it may be that.
Reactions: Thundercraft
Т

Just a map. Is there any mod adding map to the game.
And it would be great to free camera mod
Reactions: harpo99999 and Thundercraft

Титан said:
...And it would be great to free camera mod
Click to expand...

+1 to the 'free camera' mod idea. I'm sick and tired of having my camera controls limited such that I am unable to view my Tech from directly above or from directly below. Why devs... why?
Reactions: Galrex
You must log in or register to reply here.
Share:
Facebook Twitter Reddit Pinterest Tumblr WhatsApp Email Link