Shidoni said:
Do these planes/jets have to be mainly Hawkeye, or is venture good too?
Click to expand...

any corp is fine

A place, not in space.

Woo! Alright then, might as well toss something here then. Going to put these under the GA too but the stamp of approval looks fancy. :0


The F22, a pretty basic fighter, has a heavier missile armament than previous generations, pretty decent speed too.

status update:
Eagle: awaiting final renovation
Leopard: hasn't been started yet
both of these guys plus 3 bots for ZTech are coming out today
Reactions: General Douglas

here's the two new machines! the Eagle(early version, the later one had side arms with mortars, and is called heli test):

God, I love this thing
Reactions: General Douglas and BenBacon

It it okay if I put my tank here?

Operation Blackwing is one of "Kill" missions you get from Hawkeye. ans the good Sergeant.

tbh in campaign I've not touched hawkeye except for getting the licence.
also I made the name for battle techs that are posted here

Is this still active? I hope so anyway.
Here is a bomber i made in my campaign save
It's not the most practical but its fun and its pretty
based on flying wing planes like the HO 229, B2, YB-49, etc.

amazing. and yes, the decision is final: Operation BlackWing is still in operation
also the plane is nice(if you want me to modify it to become the YB-49 or close to it, tell me)
Reactions: General Douglas

notice: as an afterthought, the Z4 albatross is going to get a revamp and be upgraded for this operation. the plane itself will be massively modified, and here it will simply be the Albatross

well, I got a two for one special: the battle cat tank family got its weakest member, and the albatross is here:
the Albatross:

hello everyone, I have some sort of plan for ZTech and BlackWing here.(this was also posted in ZTech)
ZTech:
Z10: new control system test, modification to the Z7 for VTOL testing
Z11(a proposed pinwheel propeller powered mini plane): begin making the model idea and do testing
Drones: going to ask you guys, the forum members, about design ideas, other than a concept idea under Blackwing

BlackWing:
R.D.A.(Rapid Deployment Attackers) Concept: I tried a concept like this, where a swarm of VTOL planes will take off vertically, transition to normal flight, and land either vertically or conventional landing. the concept is based off of the Ryan X-13 Vertijet, and, if successful, could have some variations made onto it. note: the first rig will have no weapons.

Operation Blackwing status Update: I took a Hiatus, but I am returning. the R.D.A team will begin, making this concept craft. I might reform the R.D.A designs, and I WILL begin making a LPO(low planetary orbit) mothership and some small fighters in it. also we will have RDB's(rapid deployment bombers) coming soon. also starships will be made in bulk. I have not given this up yet folks, and I'm not planning to!

Hello everyone! as some may know BlackWing is now supported by ZTech, and I have appointed Darvin as our Second In Command, as he accepted it. I want to bring BlackWing back, as I got more ideas for BlackWing

I will be here, no doubt, but darvin can do anything here unless I deny it, being the only one higher

since @TheGamingEnder has been kind enough to invite me into BlackWing, may i present to you, the Redfin 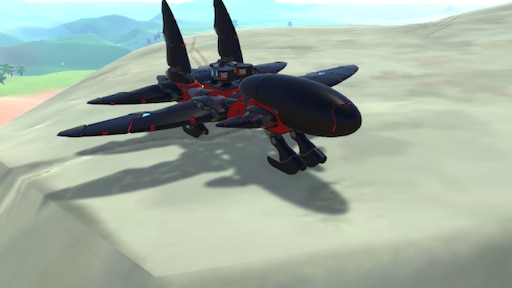 Description : The Redfin is the first prototype designed by Darvin since he joined BlackWing. Darvin being no stranger to aircraft designs, took inspiration from his previous models of carrier capable aircraft, the Canaries. The Redfin though, being a ground based interceptor, mainly tasked to take down scouts and bigger bombers, or deliver payload to ground targets. This aircraft design has a very stable flight path, even without any gyros, sometimes the pilot can cruise without even moving the stick for a good minute
Last edited: Mar 20, 2021
Reactions: BenBacon, Kupcha and Skihiley

Here is an older plane I made when I wanted a high spec interceptor/strike craft using HE cruise missiles, it might line up with what you're looking for. Do as you like with it

Originally developed by a secretive mercenary military and research organization, this plane has since been put into the open market. It is made to fill the role of an agile combat craft while carrying a heavy punch for it's speed. It has remarkable flight stability at cruising speeds, allowing it to outmaneuver even many lighter craft, and can deliver its payload with deadly precision before speeding away with it's afterburners, far too quickly for most defense systems to catch it. Still, there is space available for further modifications and customization.

Hello again! I have decided to reboot BlackWing from my end, although under support from ZTech, BlackWing will now be recognized once more as an individual. I hope we get more back on BlackWing, and possible ZTeh, which will not have it's nose in BlackWing buisness, minus the from the labs news thing.