Skorsha said:
why is there only 3 weapons in it? where are the other items?
Click to expand...

not available without steam?

Skorsha said:
not available without steam?
Click to expand...

Nope, you're outta luck with console

Note: All of them behave as BF cabs, with integrated hovers and weapons. TACtical AI might cause some issues, turn it off if necessary

40mm Point Defense Cannon inspired by 'The Expanse' TV Series, install several or these to form a defense grid against torpedoes, debris, and other incoming threat
''Don't much care for how these Duster ships smell, but their guns... pashang... their guns are excellent'' - a random Belter 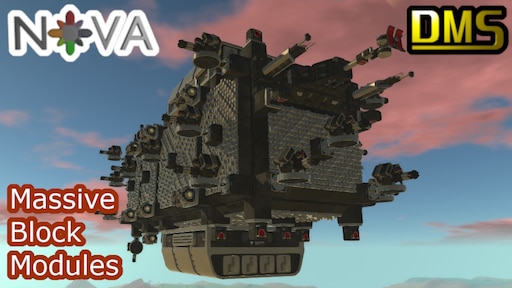 steamcommunity.com
Get ready to build ＢＩＧ

Darvenstein Military Shipyard has released several block modules optimized for building big spaceships. Instead of using thousands of individual blocks with thousands of colliders, this mod pack provides you with massive individual building blocks, therefore decreasing collider and AP counts, which in turn relieving your computer from intensive calculations for big builds.

This starter pack contains all the parts needed to construct the Ashford-class Frigate (some assembly required), which includes :

DMS ProgMat Armor Plates [HE, Power section]
Armor plates made with programmable matter capable of repairing itself. Drains a small amount of power when idle and considerably more when performing self-repair. Casually refered to as 'living metal', these armor plates are standard-issue for any ships constructed by Darvenstein Military Shipyard

DMS Ship Frame [HE, Standard section]
A sturdy frame to secure the structural integrity of spaceship hulls and modules. The ship's crew can also perform utility and maintenance duties via access hatches on both ends of this frame

DMS Naval Gyro [HE, Accessories section]
Massive gyroscope module to stabilize spaceships when entering a gravity well, as well as establishing a universal 'up' across friendly flotilla to better synchronize fleet combat movement. Due to the design being intended for spaceships, usage on smaller techs is strongly discouraged

DMS Naval Battery [HE, Power section]
Massive energy storage to provide power to all systems on a spaceship, install these modules in a stack for an even higher storage capacity

DMS Maneuvering Thrusters [HE, Flight section]
Powerful maneuvering thrusters for course correction and sublight movement. Due to the design being intended for spaceships, usage on smaller techs is strongly discouraged

Epstein Drive (ProxMod1) [HE, Flight section]
Originally invented by Solomon Epstein, this fusion engine has achieved a level of efficiency that was previously thought to be unattainable. The Epstein Drive was a vital technology that allows humans to colonize Mars, the Asteroid Belt, and the entire Sol System. This ProxMod1 model has been further enhanced with Proxima Dark to achieve FTL travel, allowing highly efficient interstellar transportation and marking the beginning of the Prospector's Age
Last edited: Jan 30, 2022
Reactions: Aardvark123

All 5 NOVA CIWS can be found here: Google Drive
The new link contains bugfixes and updates to all other CIWS, please replace the entire NOVA CIWS folder
Reactions: Aardvark123 and big_loo99

Is your brain overflowing with block ideas, but you lack the expertise to develop your own mods? Now's your chance to win the Community Research Grants. This means that the most popular block idea from you guys, will be developed into reality by DMS

--- VOTE HAS BEEN CONCLUDED ---
The 1st Chapter of DMS Community Research Grants goes to :
Halo style MAC with 7 votes

Development will begin soon, thank you to everyone who has participated with ideas and votes
Reactions: Lord_Greyscale
T 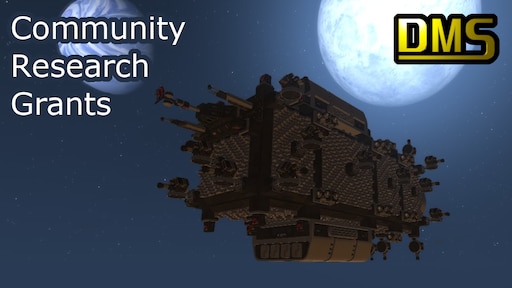 This modpack contains blocks suggested by the community via Community Research Grants, awarded by DMS. The first grant was awarded to:

MAC from HALO franchise, with 7 votes


Voting for the next grant will be held soon, visit my Youtube Channel to find out more
Last edited: Mar 8, 2022
Reactions: totally anonymous, Legionite and Aardvark123
G

how can I download nova mod on non-steam? I downloaded it on https://steamworkshopdownloader.io/ and it doesn't work maybe because I can't open the folder

To my knowledge, mods only works on steam version

​
As the winning proposal for chapter 2 of DMS Community Research Grants, the Jericho Missile was developed as a joint venture between DMS and Stark Industries. The Jericho is a delivery system carrying 18 separate explosive payload that can track and target hostiles independently after being deployed in-flight 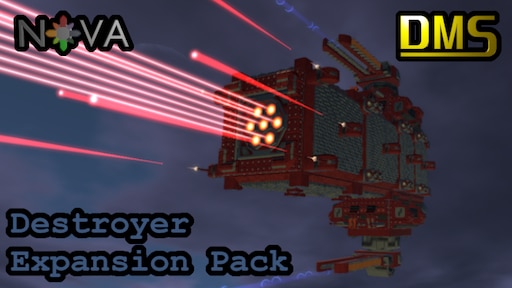 This modpack is an expansion for NOVA Frigate Starter Pack, with 11 new block modules focused on heavy weaponry for our line of destroyers and heavy destroyers, including:


NOVA Trooper (Orbital Strike) [HE, Weapon section]
A Trooper calling in orbital strike from the fleet in orbit. Each Trooper can request a strike every 30 seconds, and every orbital strike package consists of 10 L.O.K.I projectiles

Low Orbit Kinetic Impactor (L.O.K.I) System [HE, Weapon section]
An orbital delivery system for heat-resistant rods made from titanic-ignite alloy capable of withstanding atmospheric entry. When dropped from the low orbit of any celestial body, a L.O.K.I projectile will accumulate kinetic energy as it freefalls to the surface.
With only gravity doing all the work, this system is very cheap to mass-produce and maintain, making it the perfect choice for siege and blockade missions, or supporting ground troops from orbit. The lack of guidance system means that hostiles can avoid the projectiles with relative ease, which makes this system ideal to destroy stationary targets

DMS C-X2 Photon Cannon Array [HE, Weapon section]
An array of extremely powerful emitter capable of discharging highly energetic photon beam. Each individual emitter is equipped with a wave-particle focusing lenses, that can move independently from each other, creating a deadly killzone inside it's cone of fire

DMS HP-150 SOWS [HE, Weapon section]
A Stand-Off Weapon System designed to fire at hostiles from stand-off distance. If a CIWS is responsible for threats that are closing in, a SOWS is responsible for threats that are keeping their distance, or moving away from the fleet. Which is why this weapon system is vital for Destroyers with Anti-Ship roles, especially during blockade and escort missions

DMS AG Module [HE, Flight section]
After several years wasted on the effort to reverse-engineer Better Future's Anti-Gravity technology, DMS has finally achieved a breakthrough in replicating the technology. By using Volithium, an exotic particle found in unstable neutron stars, this AG Module is capable of un-bending the fabric of space and time to be almost completely flat. And since gravity is essentially just dips and curls in the space-time continuum, any object in the vicinity of this module will not be affected by gravity

Clairmont-Osgood Drive [HE, Flight section]
Courtesy of Prof. Renée de Clairmont and Dr. Steven Osgood from NOVA Academy of Mathematics and Natural Sciences, this engine is a miniaturized version of the Epstein Drive.
Despite being 80% smaller, the C-O Drive is capable of producing up to 20% of the original Epstein Drive's thrust output. The compact nature of this engine also means that it can fit in a smaller ship, or install several in a cluster.
This model is also designated ProxMod2, which means it is equipped with Proxima Dark to achieve FTL travel, and uses a unique fuel pellet independent from the tech's fuel reserves, allowing ships to operate without any conventional fuel tanks
Last edited: Jun 12, 2022

The 3rd Chapter of Community Research Grants is now open