sorry to suddenly resurrect everyone here, but what do you guys think if i release a modpack as 'NOVA blocks' or something? the blocks contained in this pack will be weapons and other equipment that are ground based. For context, it will be something akin to BlackWing blocks that i have relased a few weeks back, since BlackWing is focused on military aviation, NOVA will be it's army/marine counterpart, how does that sound?
Reactions: warbrand2

I feel that would be wise to help return the short lived faction back to life further than we are making this. We are the last faction to be semi-active, so I feel that if we were to use this pack with a link to our faction, we could not only bring this back, but also bring kingdoms back.

I am not fully active, but I am still here and might work on something in the future.

I for one would really like to see a NOVA mod

I have created the first block for NOVA modpack, this guy is a trooper, the lowest ranking member of NOVA, also known as, cannon fodder

First batch of NOVA Troopers are ready to serve

NOVA shall rise once more!

We have infantry.... can't wait to start putting them around a base.... I need to start working on a new base... hmmm.

This one is a first prime, he commands an entire battalion, or is a direct subordinate of an inquisitor/grand inquisitor

I think soon I will build a low grade, medium grade, and high grade turrets, and maybe some AA stuff as well.

It's up and running bois 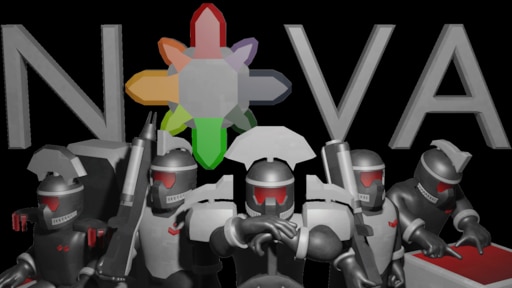 Something seems off about those numbers, like why are there more of the higher ranks then the lower ranks?

warbrand2 said:
Something seems off about those numbers, like why are there more of the higher ranks then the lower ranks?
Click to expand...

what do you mean

Total personnel shouldn't there be more then None of basic troopers? And why would the highest rank have the most? Or is that soldiers under command?

total personnel points to the rough number of subordinates that these officers has under their command, for instance a trooper is the lowest rank so they dont have any responsibilities, while a knight has 10 to 15 troopers under his command

Also, I have an idea for the naming scheme: Stars and other celestial bodies. Only makes sense, considering our name.

I would make the starter tier, or the "Dwarf" line, which would be named after various types of dwarf stars, and have similar attributes to the stars that they are named after. I have ideas for 4 different ships in the dwarf line:

Black Dwarf: Stealthy, very little weapons or shielding, but fast and hard to detect. These would be for scouting.

White Dwarf: All-rounder, good consistent damage, good maneuverability, good shielding. These would be the general-purpose ships for a lancer just starting out.

Red Dwarf: Burst damage, a large amount of damage in a short space of time, but not consistent. Would be slower than average, but stealthier, out of combat, and when in or approaching combat, activates boosters to get in and out fast. A strike craft, suitable for assassinations on a single target in a fleet or group of ships.

Yellow Dwarf: Heavy, a brawler with heavy defences and high consistent damage, but quite slow, and a larger target. Used for defending an area.