update, i fixed it, i loaded the game about 5 times and left every time, nothing happened, started a new game then loaded old game and was able to play again

Goodo! I usually end up rage quitting and deleting my saves by that point.
C

Bigtoad said:
And hi Greg. Since we're talking about missions, one of my pet peeves is that xp gain stalls out until you complete the mission task, so you literally get 0 xp for defeating the troll. That feels a little unfair since that is likely the toughest foe you have faced at that point in the game.
Click to expand...

i agree with this
Reactions: VC_Wolffe
C

Bigtoad said:
I managed to trigger the delivery cannon bug again. I'm not sure it's relevant, but both times it has happened I sold some items at the trading station BEFORE I used the terminal to order the tractor pad.
Click to expand...

this was my original thought to Someone has said that this is not the case but.....
C

Bigtoad said:
I'm going to mention this here because it's related to missions, but I don't think it's really a bug - just something that hasn't been implemented yet...

I really hope that additional missions will be added to unlock the 4-slot and 5-slot fabricators. As the game stands now (0.5.15), once I finish the missions I end up spending a ridiculous amount of time running around looking for dispensers. I really want the filter conveyor, and I either need to find one on a dispenser or find the 4-slot fabricator so I can craft one.
Click to expand...

After defeating the harvest boss, there's been a huge mess, an enemy base spawned right on top of mine (they clip through each other now), and I think there's a few more techs that spawned at once than originally intended (for the record, I took care of all of them). 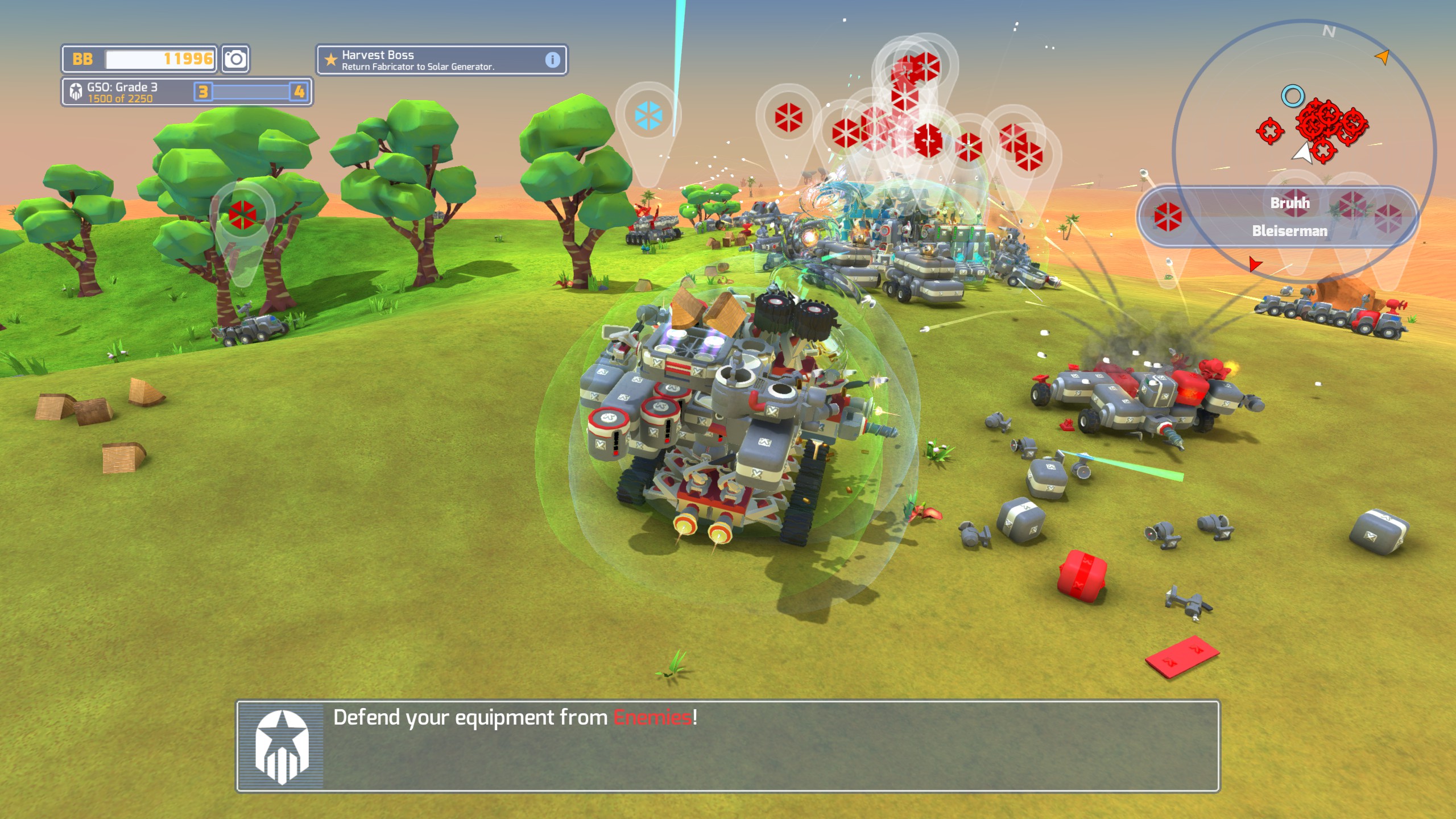 Well then... Hello.
In a newly started 0.5.14 game, having beaten the Troll and after attaching the tractor pad that drops, I'm still being asked to attach the delivery cannon to my tech, though one hasn't dropped and neither of them has been unlocked for purchase.
Click to expand...

and the only way to fix it i found was deleting your User data<ugh.

i think one bug(design flaw) that some have not reported is the Multi Trading post error, some world will gen two or more trading posts on completion of lvl 1 while this is ok it also spawns multi trolls and quest lines i think you need to limit this to one trading station for the quest line then after the initial quests are done you need to spawn one trading posts in Each Biome or multiple in each

I also just experienced this and can't progress. My first game my level progression reset and got stuck at level 1.

Now I restarted my game and still at level 1 because the drop for my radar dish got bugged. At least I think it was the radar. There was a crater but nothing in it.

I think the Mission events if not completed should reset. So if your delivery cannon gets destroyed or you lose an item the entire event should simply repeat every 5 minutes or so until you can successfully complete it.

A cab, stranded in deep space

At the start it will say "look around, you might find more of your base bomb". There is now only 1 smoke column from the solar generator. The rest happened to be removed. This message needs changing

Upon starting new saves, the delivery cannon will NOT drop from the sky, cutting off all future progress. It only works when the quest tells you to buy the cannon from the station which rarely occurs.

Some messages are incomplete

The EXP bar doesn't increase after level 3 has been reached

It doesn't mention enemy bases. I think this should be put in somewhere to warn players

During the game, many techs have shield generators and batteries, bit never use them. I think some techs should spawn will an active shield bubble

Off topic: when destroying a cab with a cannon based weapon, sometimes it doesn't show the flashing cab-death in red but still explodes

Off topic: Batteries still run when the bars have been fully depleted

Off topic: there are no plane-based enemy techs in the game

If you accidentally put the given fabricator in the delivery cannon when trying to attach it, like I foolishly did, it should drop another with a message telling you off

The quest should mention the other corporations in more detail, maybe like "Be careful, there are other corporations with the same goal as you. These include the Venture, who specialise in speed and agility and GeoCorp, an industrialist group who like their drills too much!"

Hope you can tweak/note these bugs for the future, thanks!
S

Tfin said:
Well then... Hello.
In a newly started 0.5.14 game, having beaten the Troll and after attaching the tractor pad that drops, I'm still being asked to attach the delivery cannon to my tech, though one hasn't dropped and neither of them has been unlocked for purchase.
Click to expand...

I have had the same issue(no delivery cannon with message saying pick it up) with 3 or 4 different games so far..

I got bored with my current game and started playing new games again. (I figure 15 hours of trying to find a filter conveyor is enough boredom.)

Anyway, once again I am running into the same set of bugs, over and over. Mostly I get to the delivery cannon, can't buy it and can't advance, so I start over. Once the solar array wasn't in the carter, couldn't get past that. Now I got past the delivery cannon but this time the receiver didn't fall from the sky until I had left delivery cannon attached to my base. The mission doesn't advance when I attach the receiver to the cannon, it just keeps telling me to attach it.

It seems like a common theme through a lot of these mission bugs is that the game gets confused about the map coordinates of your base and it starts dropping things away from it. It seems like it is some sort of pointer/map coordinate corruption issue that probably isn't directly related to the mission scripts. It's hard to make a functional mission when the game loses track of where things are located, no?

@Bigtoad when you restart your game are you deleting or moving the old saves from the TT folder?

I have had reacurring bugs that went away after deleting old and unused saves from the game.

Have a good one

reaperx1 said:
@Bigtoad when you restart your game are you deleting or moving the old saves from the TT folder?
Click to expand...

I have done it that way, and the next game worked, but I've also just started game after game as each one hung up, and eventually I get one that works all the way through. I'm of the opinion that removing UserData.sav or removing old saves doesn't really help. I'd have to try a whole lot more times to get a proper scientific sample. As it is now, I tend to delete the last save each time I restart, because a save with hung up missions is just clutter.

Exiting completely out of the game and restarting does seem to help with some bugs, such as the ? waypoint being misplaced. That also helps with another non-mission bug.
F

Something I have not seen here in relation to mission progression, is a way to see what we need to do next. There is a panel most times up in the upper left by the level that says what you need to do but in cases like level 3-4 after we get the fabricator and attach it to the base there is nothing, I have no panel telling me what I need to do next to progress the level. My exp keeps going up but there is no level progression mission information.

I have had the level reset back to 1 on me and the missions do not start over. Even if you knew the mission progression by heart you cannot get the level to progress.

Something I have not seen here in relation to mission progression, is a way to see what we need to do next. There is a panel most times up in the upper left by the level that says what you need to do but in cases like level 3-4 after we get the fabricator and attach it to the base there is nothing, I have no panel telling me what I need to do next to progress the level. My exp keeps going up but there is no level progression mission information.
Click to expand...

That's because they haven't finished the missions beyond level 3. I'm hoping that this happens soon - once you reach that point in the missions, the game becomes a grind of drudgery while you wander the world looking for dispensers with the 4- and 5-slot fabricators.


frostymcmuggins said:
I have had the level reset back to 1 on me and the missions do not start over. Even if you knew the mission progression by heart you cannot get the level to progress.
Click to expand...

Post-1500: The harvester drone.
Erudite and erudium are swapped in some dialogues, and "erudian" (not one of the forms) makes an appearance.
There wasn't much erudite (the green crystal) in my starting grassland, and I had trouble finding it. There seems to be a pointer associated with this mission, and it was pointing to a place out in the desert, near (but not at) some ignite (the orange crystal).

It seemed like only 2 wheels dropped with the 2-block to assemble the drone (the others might have been under my base) and it continued telling me to attach them until I picked up a couple dirt wheels and stuck those on.

The AI is still... not, and it didn't seem to know to fire the supplied gun to gather resources.

I reconfigured it and added a drill I had, and it didn't spend long enough bumping things to break them.

I shot the trees it had found to help it, and when it had 3 pieces, it stopped. It doesn't know to find (or where to find?) a place to drop off the load it has.

I had the same experience in 3 different seeds last night. However, in all cases, the usage of my own wheels to complete the set did not progress the quest chain. In the last 2 attempts, I made sure to be away from the base when the fabricator produced the AI module to verify how many wheels fell, I got 2 in 1 and 3 in the other, but I swear there was 4 impacts in all cases...

Also, in the first seed, the Guardian Troll ran away instead of engaging! It ran for.ever. In a straight line. Until it got stuck on a clump of trees where it died a sad death.

I'm not getting the number of conveyers usually dropped. Just 1 every time period.
L

During the battery mission, no tree has the battery in it (i cleared out all of them) but no battery was dropped. Also the plane does not seem to be able to take my cab, as in when i take off the cabb the plane is not responsive in any way and no mission starts. Not sure why it happens but I hope you can fix it at some point.
You must log in or register to reply here.
Share:
Facebook Twitter Reddit Pinterest Tumblr WhatsApp Email Link