ZeroGravitas said:
Sure. That would be one way into this. But I'd say that the techs on the target list should be no more than a (black) silhouette, until player has encountered and scanned them. Otherwise, you'd just go out and kill a bunch of techs until the mission completes, identical in practice to the current Tech Hunter missions.

Awesome, a graphical mock-up. I was intending to do one myself (not quite like this screen, of course).

Hmm, I see (I think): so being able to see the tech's design before hand would let you know what type of tech to go hunting it with...? I guess you might have a large, heavily armoured fighters verses fast runners... But in practice you'll still be dealing with all the regular enemies along the way (or flying about to scout enemies more quickly), which will dictate your own design, no?

I think keeping the enemy tech designs mostly a mystery would make more compelling game play; hunting for the unknown on only a few clues. I mean, you could have this added to (some) existing missions too. But I was aiming to extend the end game by many hours, for the enthusiasts, with minimal dev effort on crafting bullet-proof set-piece missions.

Anyway, you goaded me into making a (terribly rough and inaccurate) UI mock-up myself: 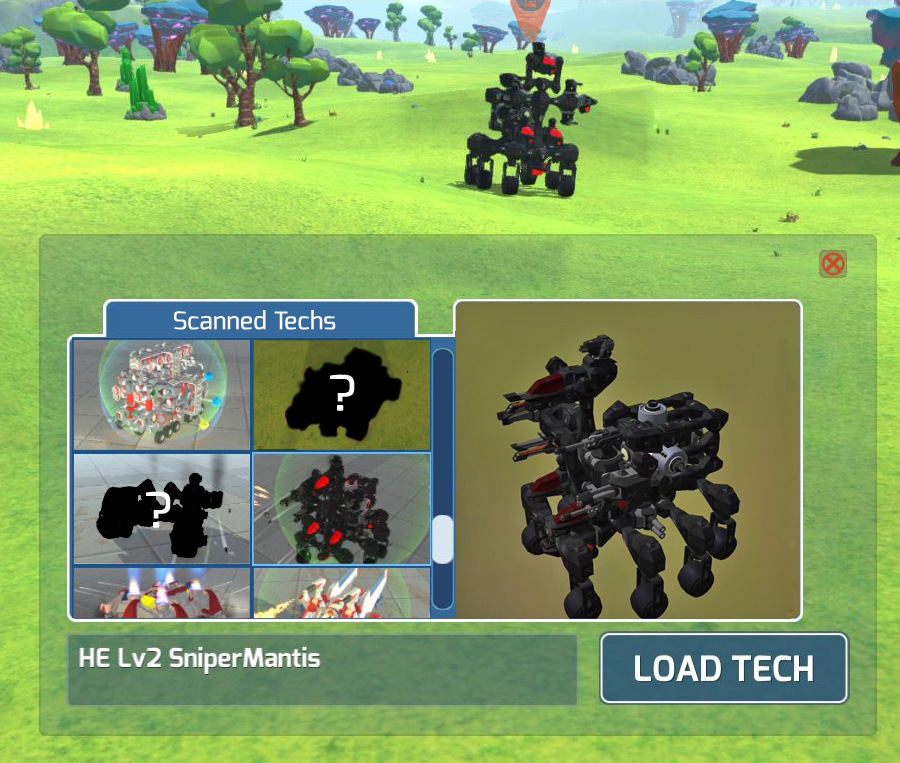 It would be bigger, with at least the full 4 columns of techs, currently in the load menu. With an expanded menu available in Campaign, as well as Creative/R&D, and the UI integrated with separate load tabs for techs from each game mode. Probably separate tabs for tech design collecting missions and general scans (with each tab literally a separate folder in the game's snapshot directory).

The image backgrounds for unknown techs could show the biome they are expected to be found in, as a subtle hint (if not making it more explicit too).
Click to expand...