You'll be able to watch them in action on Wednesday 15th June from 4pm UK Time on Twitch:

This thread will be archived just before the stream to make way for the next wave of Community Core submissions.
P

This is my recreation of a cake from Minecraft. It doesn't have weapons, but it floats and moves faster than 50mph.
No mods are required for this tech. 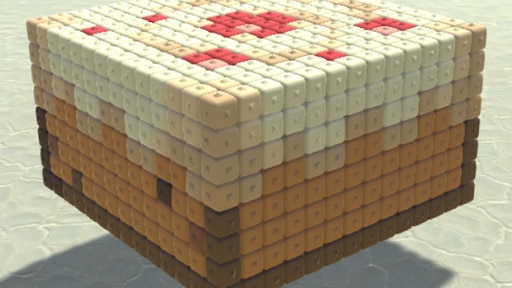 Here is another tank.
Isn't it adorable?

Did I mention it gives an immersion that it is a tank?

Presenting my own personal creation: The GC SuperJet

Surprisingly, this is the absolute fastest jet I have ever created, even faster than a much smaller and lighter Venture jet I built a while back. During horizontal flight, this bad boy reaches a top flight speed of 251 mph. It's speed is awesome for just traveling across the world, but unless you got a large, level clearing, or a landing pad, it can be a bit difficult to land, so I would not recommend this jet for traveling between bases on the regular. However, once you find the angle of attack (I believe roughly 30 degrees downward), you can land this guy very gently and without much if any propulsion.

The cage you see at the front is for insurance (a previous iteration I had made went face first into the ground during testing, instantly destroying the tech before I took a snapshot). Also, the jet has an ever-so-slight downward pitch, so keep that in mind when flying.

All blocks on the tech should be vanilla, and the only custom control is one I make to all my planes: I make sure that SHIFT is tied to both acceleration and propellors.

As an added bonus, the only non-GC blocks on this tech are two Venture radars under the cockpit. An almost-pure Geocorp tech.

Today, I present to you an older creation of mine, though one I find rather enjoyable.
Originally created all the way back in 2020, this is MK2 of my Aelius Hovplane. As the name suggests, it's a hovercraft airplane hybrid, comprised mostly of Better Future blocks. As with all of my techs, it packs a monstrous punch, though this isn't nearly as refined and varied as my more modern designs, something I greatly dislike about this tech. Nothing very special, just a neat plane that I thought you may enjoy. Perhaps it deserves a rework to bring it into the modern era? Let me know what you think.

Instructions:
The Hovplane will stay on the ground unless you give it lift. It can fly with either hovercraft controls, using the left and right arrow keys for pitch, or airplane controls, which you can quickly switch between using C, as you more than likely know. It doesn't have the greatest of pitch, but that's part of the downside for it being both a dedicated hovercraft and airplane, though as an airplane, it has far, far more firepower.

Hi Matt! I've got a new modpack for you, turn on captions, hit play, then sit back and relax for 7 minutes