Every corporation wants something from the off-world, and have different quests like everyone knows. But how'd they be involved, that's the question. First, what would their NPC be and what would they want? Second, what would their actual campaign lore be and how would it tie in? (I'm repeating myself sorry) Third, What would their unique quests be and in what way could their blocks help the player in the camaign? (Someone's probably made a thread like this... its ok to delete this thread)
Reactions: Soviet_Samuelson

First off The NPC. I'll get back to that once iv built her, But Better Futures Gaia would float on spot using hovers and the hover stabilizer rather than anchoring. would liftoff with Linear Motion Engines rather than boosters, and would have no weaponry. What she would want is information.

Core lore is that they are a high end, environmentally considerate, Luxury manufacturer. that's already established.

Missions would include the following types:
Race: Not the traditional time trial races. Long distance cross country races. For instance, you have two minutes to make it 1.5 Kilometers to the target destination.
Flight: Of course our prime flight corp would have various flying missions including Air Drag race, fly through loops, and new scouting missions that wound require you to locate landmarks, enemies, trading stations even rare resources.
Retreival: Go steal a specific part from an established enemy base or tech. this part would be coded to drop and not be destroyed, much like your radar in early game.
Exploration: Simply accumulate distance from the mission start point. 10 K traveled, 50 K traveled etc.
Resource Location: Find a rare resource and bring Gaia a sample. (Could be an excuse to bring back Alloys)
Escort: Protect a friendly tech on it's journey to it's destination.

Finally, tying in with the environmental focus, Combat Missions:
Fighting Pollution: Go kill another corporation's Mining base. Save the planet, one defiler at a time.

also there ought to be a couple tutorial missions here for Control blocks (not cabs), like the controllable gyros, bubble switches, and Liner Motion Engines.
Reactions: Aardvark123, AstraTheDragon, Legionite and 2 others

Wait what nobodys already done this? Pollution: Sometimes spawns in places, might have a block or two under it. possibly ore. Similar to Fortress: Destroyer's plasticyte.(imagine not in water) 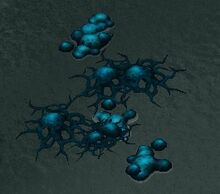 (hmm NPC should have the LME's spinning super fast or use orb boosters) NPC should have a cross between the stabilizing computer and BF cab. Ether a cute digital face or scrolling data could be on her special NPC cabin.
Reactions: Soviet_Samuelson

stickman_king_28 said:
Ether a cute digital face or scrolling data could be on her special NPC cabin.
Click to expand...

Yes she should look like a really clean Japanese prototype android or something,
Also I like how we all instantly assume she's female.
please please please make her look like she could be a viable utility vehicle in the off-world, she can be humanoid but if so she must look like a flying mech or something
Reactions: Aardvark123 and Soviet_Samuelson

She'd ether be like "Ah everything is perfect i'm so calm and casual" or "AAAAAAAAAAAAAAAAAH YOU HAVE CORNERS ON YOUR BLOCKS HOW UNSIGHTLY UGHHH"
Reactions: Aardvark123 and Soviet_Samuelson

stickman_king_28 said:
She'd ether be like "Ah everything is perfect i'm so calm and casual" or "AAAAAAAAAAAAAAAAAH YOU HAVE CORNERS ON YOUR BLOCKS HOW UNSIGHTLY UGHHH"
Click to expand...

even they cant help it sometimes tho
Reactions: Comrade Commie

Can we please continue this
Reactions: Soviet_Samuelson

stickman_king_28 said:
Can we please continue this
Click to expand...

Ok! Fine, have some hoverpads, not to mention that im vegan.