Aerion Corp: the interstellar asteroid miners, touching down to try their hand planetside. 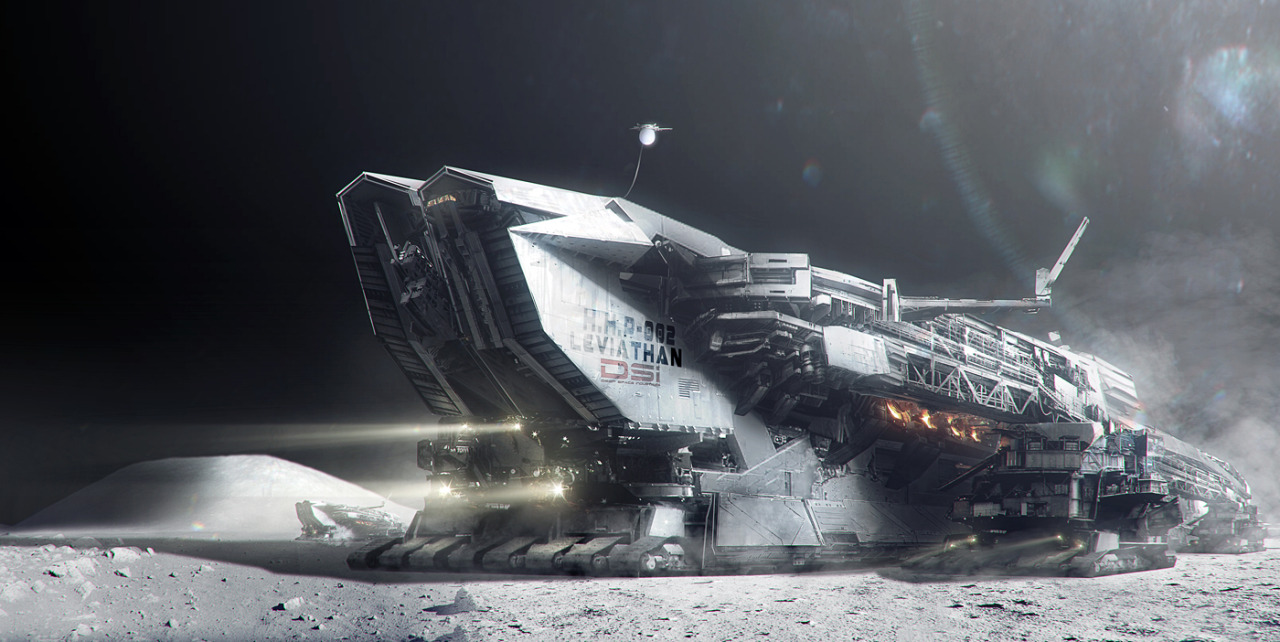 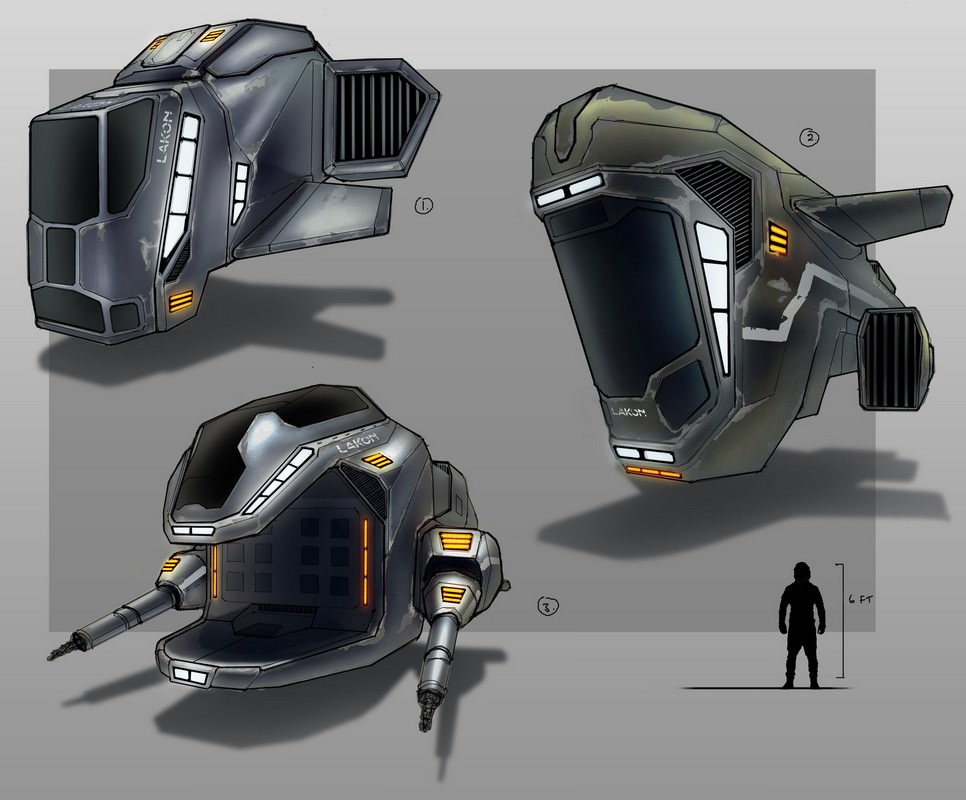 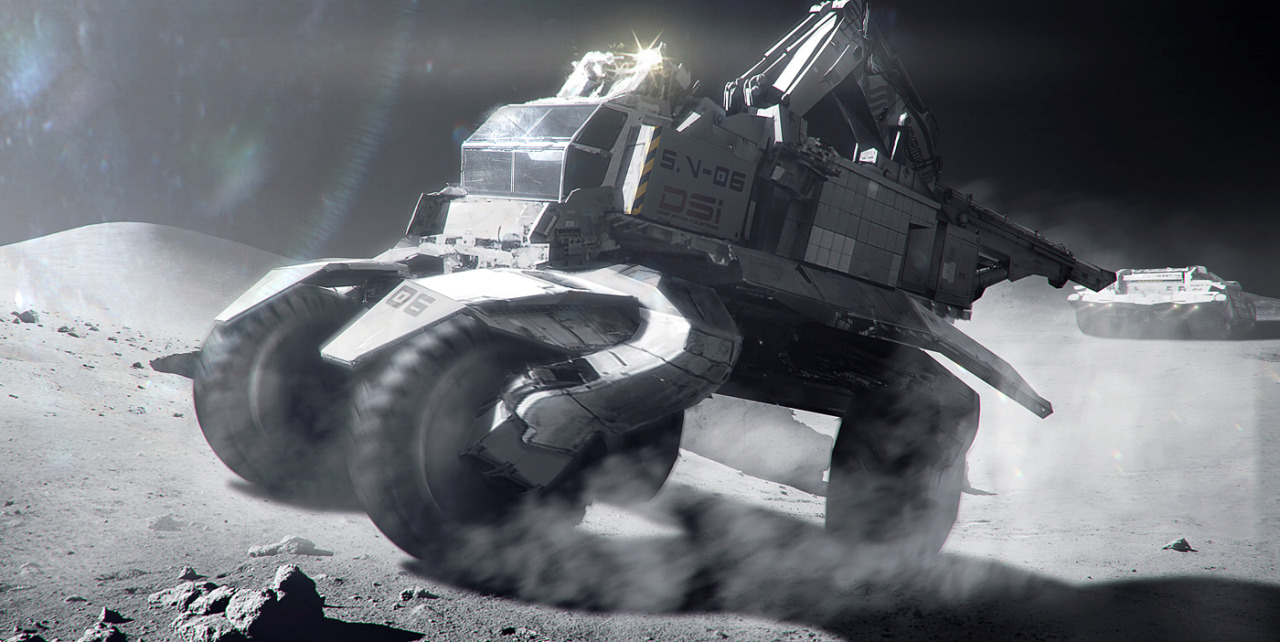 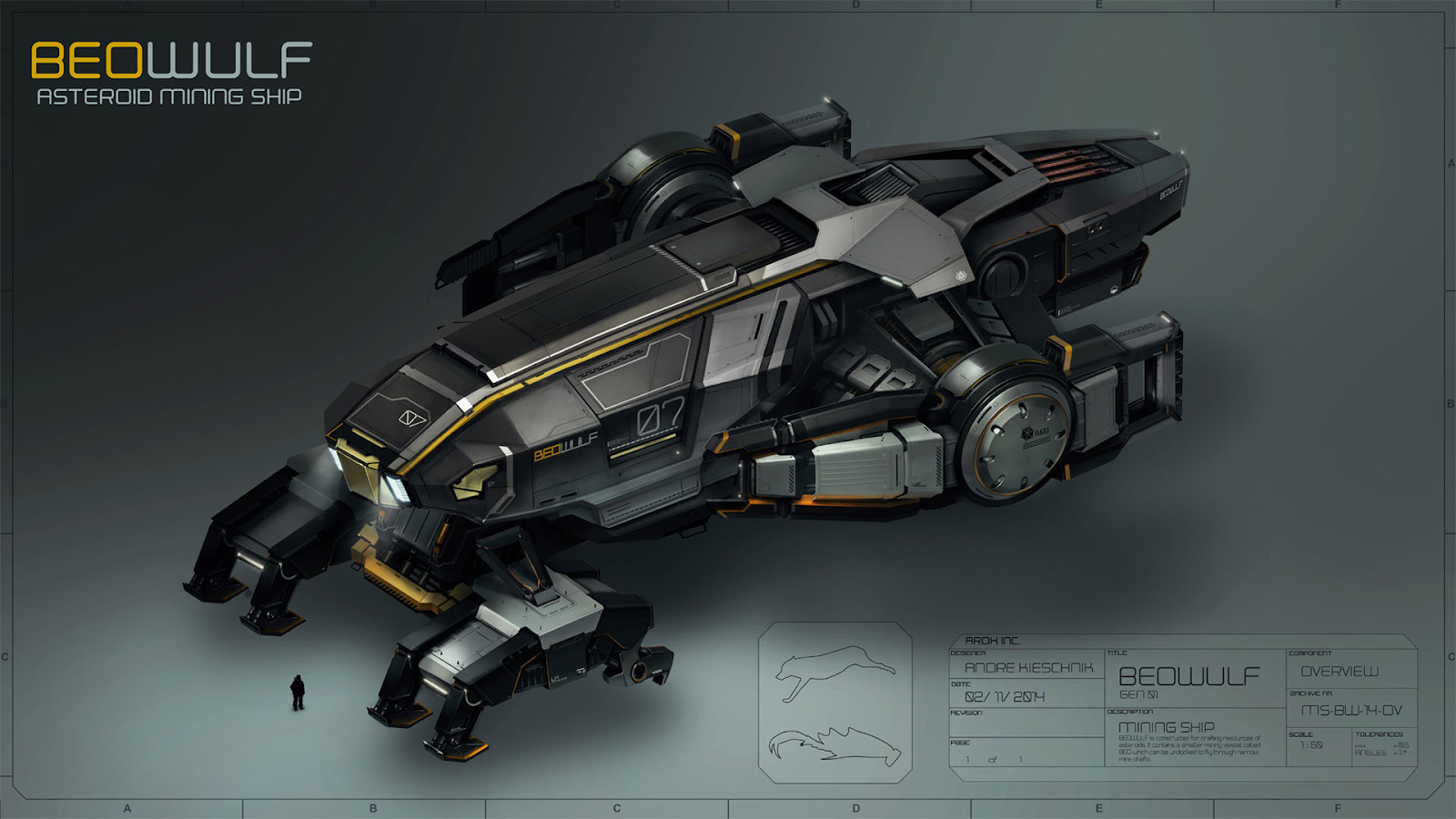 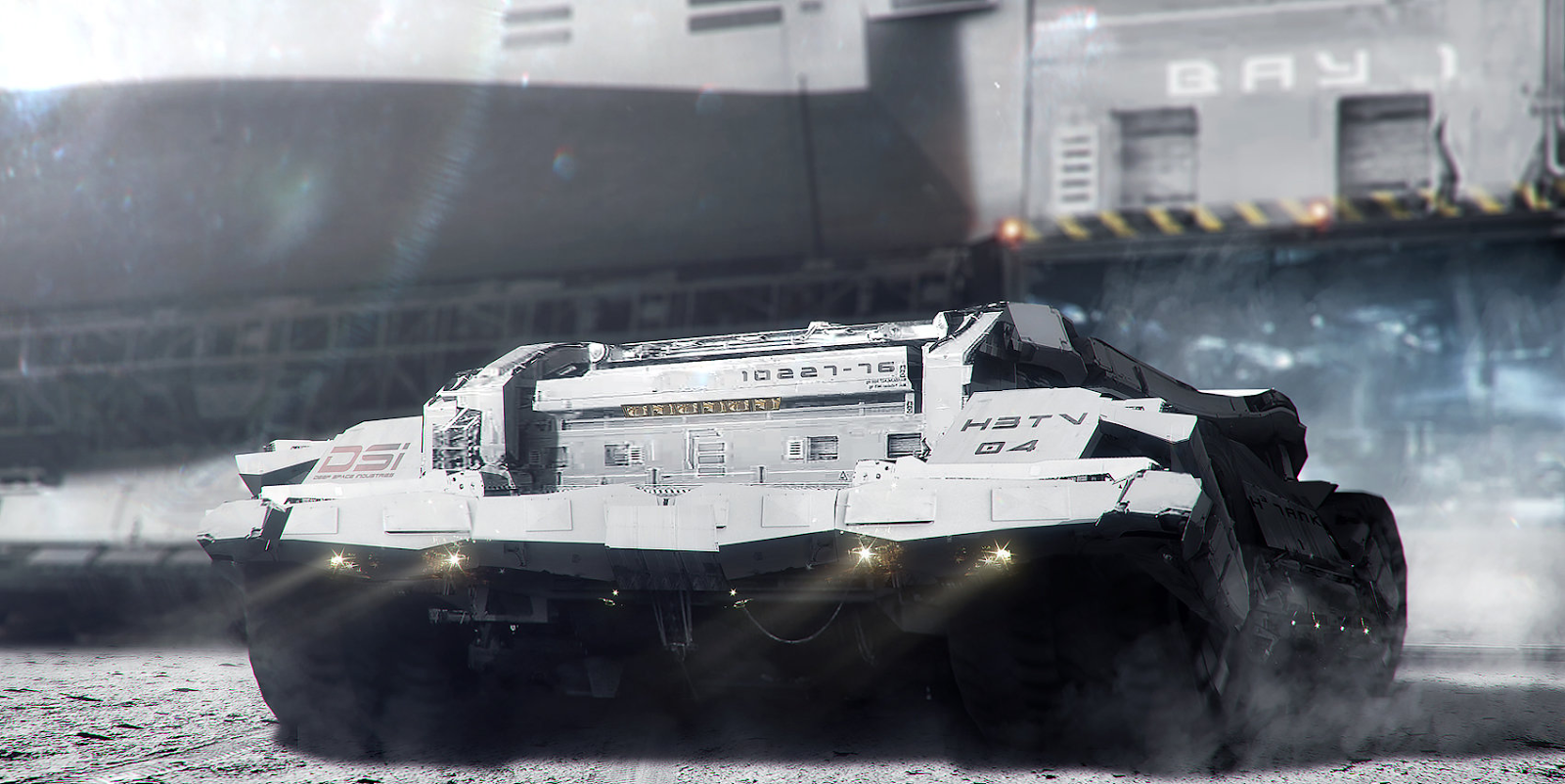 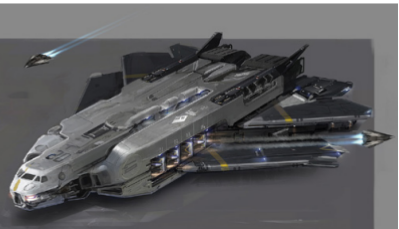 Backstory:
The Aerion Mining Conglomerate formed from the IAMU (Interstellar Asteroid Mining Union). Their technology evolved entirely on its own, separate from any outside supply chain, thanks to a unique combination of decades of isolated process-and-dispatch cycles and self-repairing/improving technology. After a few hundred cycles of innovation and monetary enrichment, they saw the need for more diverse resources back in the Sol system, and designed proper blocks for the Off World. Their tech is expensive, but will last you a long time, thanks to the fact that all Aerion blocks are capable of slow self-repair.

Aerion builds their own technology, rather than improvising or improving other tech. This results in unique materials and technologies.
Aerion is at once hypermodern and a bit old-fashioned. In order to stay sane during years-long shifts aboard mothership harvesters, Aerion miners made a sort of meditation ritual that helped them cope with the emptiness of space.
Aerion is tougher than most corps. Aerion blocks are designed to be massively tough and redundant due to the fact that they're derived from spacefaring components.
Aerion is derived from mining equipment, but unlike Geocorp, who almost exclusively has melee weapons, chisels and hammers and saws are not a great idea in a zero-g environment. Thus, almost all Aerion equipment was built for at-range harvesting.
Last edited: Mar 4, 2020
Reactions: Rafael999, Coolboy01, Seth_Seth and 9 others
V

Aerion Small Mandible: A swept block shaped like a sharp manta-ray mandible, with one AP on the inside and one inside the jaw tip.

Aerion Edge Block: an angular block, meant for softening the sharp 90° angles of an Aerion vehicle chassis to softer 45° angles.

Aerion Inverted Corner Block: Meant to connect two edges on an inside joint.

Aerion Cupola Mounting Block: A raised block, with 4 APs on the top and 8 on the bottom, meant for raising a weapon up off the surface of a ship.

Aerion Prow Block: 2-wide block, meant for decoration or to provide a good place to put your main guns. Resembles the nose of the first vehicle in the aesthetic. APs on top and back.
Reactions: fortifier2119, Seth_Seth, Morningstar and 8 others
V

Aerion Pulsar Cab: A large 3x2x2 cab. Comes with a built-in RTG for slow power generation and a battery to hold it, as well as a pair of pulse guns, a self-repair system, a small shield and dedicated radar. Gets around on fold-out rover wheels. Not particularly fast.

Aerion Nebula Cab: a 2x1x1 cab. Has a single pulse gun, self-repair and a smaller RTG and battery. Has a resource collector holding 5 chunks on its back. Gets around on a trio of rover wheels.

Aerion Regolith Magna Wheel: a rover wheel that features special electromagnetic grip pads, allowing for both higher traction and steeper slope climbing. Enough of these and a few boosters and you might be able to climb sheer cliffs. Comes in large and small variants.

Aerion Veris Magna Track: A smaller track with the same magnetic grip properties as the rover wheel as well as excellent suspension.

Aerion Ingenii Twin Wheel: Two grippy wheels mounted on a rocker bogey, much like the Mars rover’s back wheels. Doesn’t have magna grip but is quite quick and nimble.

Aerion Quark Heavy Pulsegun: a larger and stronger variant of the Nova, but with slower recycle time.

Aerion Quasar Pulsegun Battery: a cluster of Quarks, put in a housing in order to fit on a much larger ship.

Aerion Aquila Mining Charge Launcher: deploys rocket-assisted mining charges that do not have homing but do have a harpoon, so it buries itself in the target before exploding.

Aerion Flare Beamdrill: relatively short-range but devastatingly powerful. Far too big to be mounted on anything except a full-scale harvester.

Aerion Sirius Energy Mortar: a heavily modified version of a magnetoplasmic dispersion packet launcher, a mining tool meant to induce seismic waves in large metal asteroids in order to shake them apart. This version is designed for in-atmosphere combat/mining, and instantly harvests any resource seam, in addition to ignoring shields and dealing blast damage.

Aerion Scorpius Extraction Cannon: Massive, slow-charging laser/tractor beam hybrid with an eight-slot resource collector on top. Fires a laser beam surrounded by a tractor ring, sucking up all resources it frees and automatically refining them.
Reactions: fortifier2119, Seth_Seth, Morningstar and 8 others
V

Aerion Coupler Beam: moving two blocks within 10 units of each other and on different techs will cause them to form a linkage, which can be broken by right-clicking either of the blocks. The block requires 10 seconds of cooldown before it can couple again. Coupled techs share power.

Aerion Libra Power/Fuel Meter: shows both power and fuel, as well as net gain/loss on both.

Aerion Firma Balance Computer: Functions identically to the BF stabilizing computer, in addition to being able to be turned on/off, and hold a position/orientation (keybind) in order to harvest more readily.
Last edited: Mar 4, 2020
Reactions: fortifier2119, Seth_Seth, Morningstar and 8 others
V

Aerion Signum Shield Projector: shield size is directly proportional to total amount of charge available. That means that it fits equally well on a mothership as it does on a singleship.

Aerion Obitus Scrapper: Do I need to explain this one?

Aerion Trifid Silo: Must be anchored to function. Holds 360 resource chunks in a 6x6 space.

Aerion Resource Blocks: Each block holds a whopping 360 resource chunks in a 4x4x4 space. Does NOT have auto-repair.

Aerion Locus Small Thrust Cluster: 1x1x1 block, has jets on corners instead of centers in order to allow internal placement.

Aerion Alveus Fuel Tank: comes in small and large, slow recharge but massive capacity even for the small one.

Aerion Statarius Rotor: Small variant only, 1 bottom AP. Features a gimbal system so movement is possible with only one rotor, or position/orientation hold with a balance computer and some hover clusters. Removed, didn't feel in keeping with Aerion's theme.
Last edited: Mar 19, 2020
Reactions: fortifier2119, Seth_Seth, Morningstar and 7 others

cool, but some things are either too powerful or already exists
Reactions: Zonko
V

Nooboid said:
cool, but some things are either too powerful or already exists
Click to expand...

This whole corp is intended to be an end-game corp, accessed after Better Future.

Sounds like Geocorp with some Better Future blocks.
V

That's sort of what it is, an upgraded Geocorp that's built in space rather than on the ground.

Are these blocks already finished or WIP?
V

DylanHunsel said:
Are these blocks already finished or WIP?
Click to expand...

Right now they're WIP. I want to make em, but school is a real butt.

Eric Johnson said:
That's sort of what it is, an upgraded Geocorp that's built in space rather than on the ground.
Click to expand...

Ok. Why?
What role do they fill?
V

Zonko said:
Ok. Why?
What role do they fill?
Click to expand...

Oh my. This is definitely a corp i could get behind. I love it!
Reactions: DaGitFromDaWaagh
V

Epic afdc said:
Oh my. This is definitely a corp i could get behind. I love it!
Click to expand...

It's probably gonna take me a bit to learn to work any sort of 3d modelling software, but yeah, it's gonna be a thing eventually.
Reactions: Morningstar

Eric Johnson said:
It's probably gonna take me a bit to learn to work any sort of 3d modelling software, but yeah, it's gonna be a thing eventually.
Click to expand...

You can do it! I believe in you!
D