Whenever I make an Item infinitely it would sometimes take the item from the Silo stacks but not complete the craft. Like when I'm crafting a battleship cannon it has that item made by 2 rodius and a carbite, it will pull the required items but sometimes will skip the components factory even though its requesting them.
Reactions: Twigjack and ZeroGravitas

It sounds like you may be describing the known bug which happens when you add a Component Factory *after* the Fabricator you are using. Or maybe when you have 2 Refineries causing the allocation to alternate and let raw resources past. But I'd need to see a save or snapshot of your crafting tech to be sure it's not something new (as I've seen weird new, semi-random behaviours in 0.8 and 0.8.1.

Well the factory section is on a loop of 8 component factories and the fabricators are located outside the loop.

I've also uploaded a clip with the bug in question


And here's my crafting base

Any known way to get around this bug? Cause I'm having the same issue...
Reactions: ZeroGravitas

JuanPinoy said:
And here's my crafting base

Oh wow, that's actually a snapshot... Has the framing code for snapshotting changed then, @kae? (I've not seen one that wide aspect before.)

Here's what I'm seeing when I load it up, though (after stripping out some superfluous energy parts):

There's lots of places where the conveyor directions are disjointed. (I assume it wasn't like this when you snap-shotted it?)

As for your originally reported issue(s): could we get a game save file from you @JuanPinoy
and @ifnotthe2nd?

I think I've seen something like what you've shown in your video happening inexplicably too. But I'd need to poke at your setup, in action, to check that it is not just experiencing known bugs (a couple look similar).

Oh no the conveyors got messed up

This is what the conveyor line is supposed to be The green is the storage line from scrappers while the blue line is the crafting line. Having a separate line for the storage means that I can queue up a lot of items for scrapping with no worries of affecting crafting.
Reactions: ZeroGravitas and Soviet_Samuelson

Although I wonder why the conveyor lines became messed up it wasn't in the snapshot.

JuanPinoy said:
This is what the conveyor line is supposed to be
Click to expand...

Oook. I managed to reconstruct your tech from that (a right pain trying to get parallel conveyor lines to flow as desired - hence why I always avoid using them). I really wish you'd sent a save.

Anyway. Yeah - I also see the kind of behaviour shown in your video. And it's not down to this known bug (when a Fabricator's added before Component Factories). I replaced the Fabricator to be sure.

The superfluous resources sent, here, changed each time I re-ran the save (attached). From identical starting positions... So it seems that it's a non-deterministic bug, as far as the user is concerned.

@kae - for reference, I crafted the same block as @JuanPinoy - a Seeker missile pod from the Hawkeye Fabricator on the far right corner. 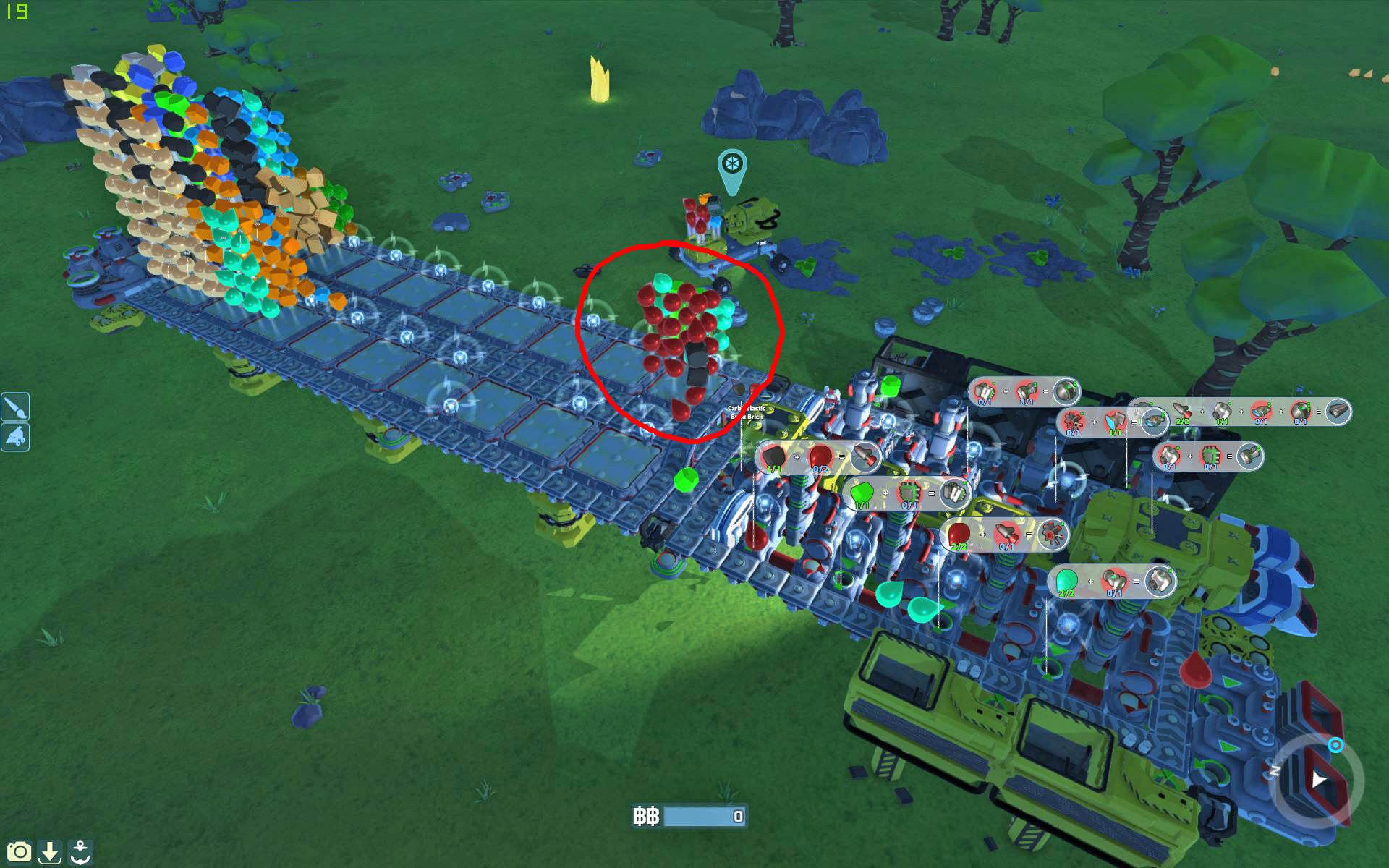 I'd seen hints of this previously (pre-0.7.9) when using my highest throughput crafter, with all 3 conveyor lines churning out missiles at full speed. But never to this extent.

The total length of the crafting Conveyor loop, and the number of Silos and Factories connected to it, seem like they are contributing factors in this instance. Shortening the Silo array down to just 6 Silos total (3x3) seemed to pretty much stop it from happening. I'd recommend avoiding long loops anyway (or loops at all). And avoid having more than 6 Component Factories on a loop, in general, for overall efficiency. (Use parallel production lines.)

Burdening my GPU and CPU (using an external program) appeared to have no discernable effect on the result of testing, either with the original (big) base, or the contracted version I made (which always worked pretty much OK).

Also, I'm pretty sure I saw something like this in 0.8, with my ultra-minimal CFS Perhonen Mobile build, but I couldn't replicate it in 0.8.1 (I think it was different versions). But now i'm thinking I can't be sure what works because it can be different between reloads (or per crafting item?)...

So it may be a case of too many silos? Generally I tend to store my resources in geocorp blocks as its easier to reach rather than hawkeye ones for mass storage. Also I dont know if you've experienced it but sometimes component factories will not craft even if the resources required are already in the loop it will fill one of the two components but not the other.

JuanPinoy said:
sometimes component factories will not craft even if the resources required are already in the loop it will fill one of the two components but not the other.
Click to expand...

Do you mean that it sometimes won't even call the necessary resources out of the silo, when they are sat there? As opposed to what we're seeing above, with the needed resources repeatedly bypassing them and looping around.

No the resources repeatedly pass the component factory.
Reactions: ZeroGravitas

I had a save that showed a component not going into the factory but a restart cleared it by wiping out the resources it had already accepted... Seems to be part of some kind of error handling. My problems though where fixed for the most part by replacing the fabricator (yay for known bugs and their solutions)... I still get some superfluous resources but that's a problem I can live with...

Before I fixed things with the fabricator replacement...

I noticed that if I canceled the recipe call up and did it manually it worked just fine... Could be the recipes are not being automatically called up correctly. When I did let the called up recipe run... I could increase my odds of the factory not resetting and losing the resources it had already accepted by keeping the resources close together and making sure the ingredients went in with the right most ingredient in the recipe going in first. Probably all known by this point though...
Last edited: May 29, 2018
Reactions: ZeroGravitas

ifnotthe2nd said:
I noticed that if I canceled the recipe call up and did it manually it worked just fine...
Click to expand...

Do you mean crafting each component manually from the Component Factory right click interface?


ifnotthe2nd said:
I could increase my odds of the factory not resetting and losing the resources it had already accepted by keeping the resources close together and making sure the ingredients went in with the right most ingredient in the recipe going in first. Probably all known by this point though...
Click to expand...

quick question where do I find my saves?
Reactions: ZeroGravitas

JuanPinoy said:
quick question where do I find my saves?
Click to expand...

Heh, I did wonder if that was an issue. Look here:

Thanks for the info Zero... Yes I would take one of the recipe ingredients and pull it so far down the line the factory didn't "see" it then I would right click the factory and select the offending recipe myself... It only needed to be done for recipes that were called up after it just manufactured a component it needed for the next recipe... If the component already existed before I started making something at the fabricator then it was usually fine...

I was thinking I should have saved that autosave that had the fuel injector not being accepted by the factory but just staying on the conveyor loop... but ya I wasn't sure where the saves were going and didn't want to search for it... I'll save a shortcut somewhere for the future...
Reactions: ZeroGravitas

ZeroGravitas said:
And it's not down to this known bug (when a Fabricator's added before Component Factories)
Click to expand...

Oh man, not another one

I'll take a look into this, although this might be the same thing Django has an older bug in for, thanks for reporting guys!