Maybe some of these are undesired behaviours, I'm not sure. I can envision reasoning behind each, but maybe it's time to tweak some...

This report stems from this thread by @Redlegdaddy, where he rightly identified that all spawn activity ceases if you stay still. Even if you kill all the spawns around you (e.g. with long range weapons, like Avalanche launcher missiles) no more spawn. You then need to move beyond 100m or switch techs (on the spot) in order to end the spawning drought.

ZeroGravitas said:
What (else) we know:

► High certainty: Enemies always spawn between 200-300m from your controlled tech. (I was wrong earlier in saying over 300.) [Edit 2018-06-27: Actually, sometimes they will spawn in over 300m away, in my test setup where all the space closer in has been blocked by my turrets.]

► High certainty: Enemies only spawn in front of your tech (~180 degree arc). Camera can be facing any direction. This might not be 100%, with me seeing some possibly just beyond this angle. But seems so significant as to indicate a strong biasing factor, at the least. Often two land right next to each other directly ahead. So maybe a normal distribution function centred on dead ahead...?

► High Certainty: there is a 100m exclusion radius around every friendly tech (anchored or not?). As shown previously, in this thread about R&D spawning (back when you could buy techs):
But this was not holding, with techs spawning on bases, as I showed on video in this thread last year, where Adriano said:

► Hypothesis: Spawn events that are blocked by the 100m exclusion radius around a friendly tech are lost. So if 4 spawns are blocked like this, no more will happen until drought conditions are broken. Even if the blocking friendly techs are removed.

► Hypothesis: Spawn rate is ~1 every 10 seconds? (Would need to plot the arrival times of a lot of techs to get a good idea...)

► Hypothesis: Flat spawn rate until 4 enemy techs exist and then no more? (Or does it scale down as more exist?)

► High Certainty: after destroying any of 4 spawned techs, player tech must move over 100m to re-initialise enemy spawning. Or switch techs. This might have to be to a new tech or one beyond 100m.

► Sure: Enemies are frozen beyond 200, unless you are looking in the opposite direction, whereupon they come back to life and might kill each other, for example.

► Wild speculation: Are enemies the fleeing type if looking away when they spawn...?

► High certainty: Enemies beyond 450m are forcibly de-spawned, even if looking right at them (day or night, I think).

► Unknown: Can despawns happen closer while looking away?

For example, I'd suggest tweaking the spawn algorithm so that it spawns all around with even odds while you are stationary (for extended periods). Rather than biasing strongly to in front of your selected tech.

Other tweaks I'm not so sure about, since there's positive and negative consequences...

• "SpawnTest CPT5 a" - new world campaign with drought in progress for a demonstration.
• "SpawnTest CampOld a" - a 0.7.5 world with drought, plus a 180 degree arc of turrets set up in front between 200-300m, blocking spawns (so that nothing spawns even if you switch techs - actually an odd one can sneak in, a little over 300m).

Oh, and I shouldn't forget that there's no spawn cap once you're above a certain altitude (probably needn't be more than 3000ft). As @reaperx1 showed in this video (and I've just checked that it's still present in 0.8.1.3).: 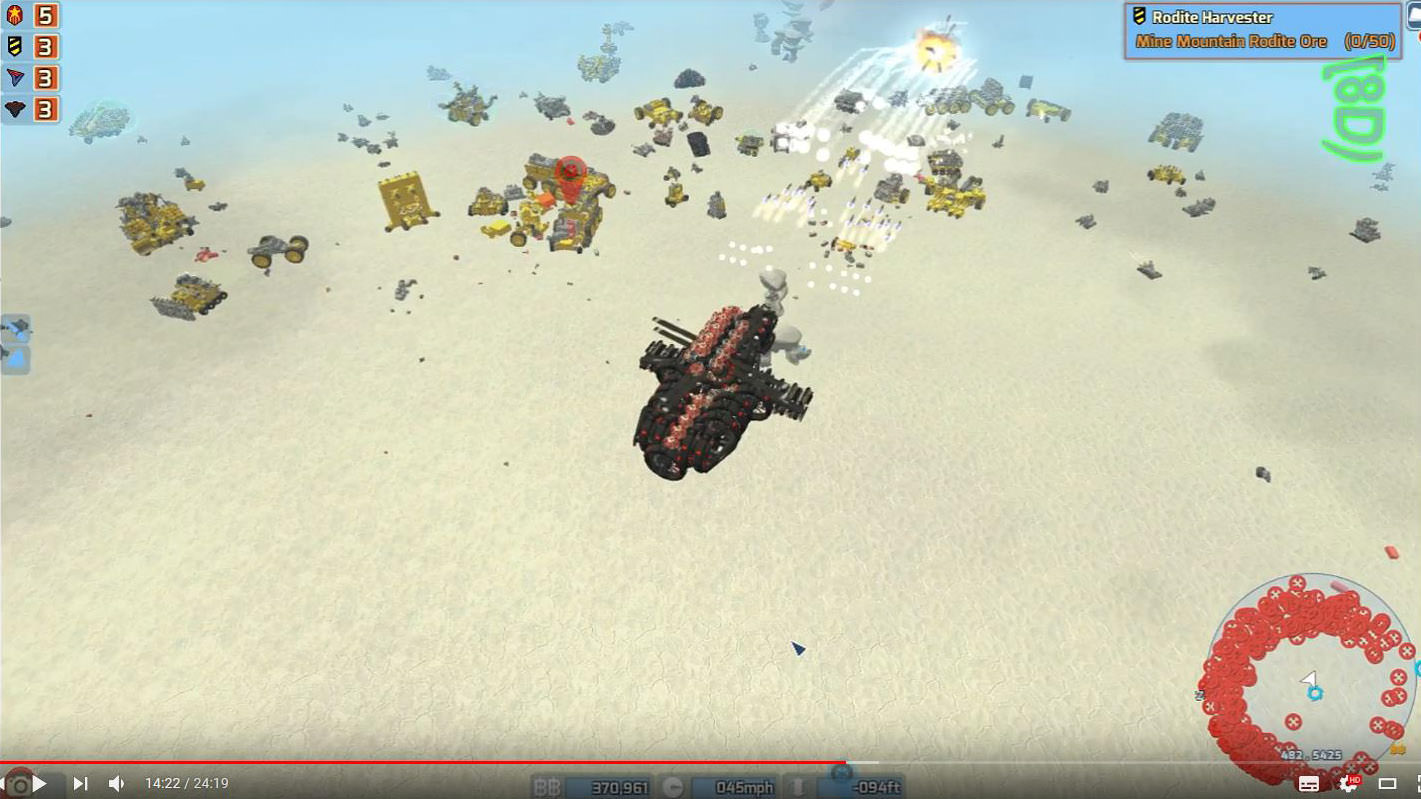 Test tech attached (unanchor to go straight up, anchor to come immediately back down).

In my view all the spawning activity in this game and the way enemies and challenges are presented, missions aside, currently is very artificially feeling and doesn't give the impression of a populated world living its own life at all.

Actually it seems to be the weakest point of this game overall at the moment.

Performance issues aside I'd suggest for developers to rethink how the player interacts with the world and how and with what it is populated, etc. The game may be mostly about building at the moment but there is not much purpose to all this building at all currently. Outside of missions the game is very empty and weirdly feeling indeed.