Cab can then be sent to inventory, or whatever (as it's no longer your focus). You can add blocks to a controller-less tech, but removing any will disintegrate it, as if it were a tech death (hanging the rames for a second or two). In campaign, this will bring up the re-spawn dialogue, offering either the cab-less tech or a nearby friendly tech. If you have no techs nearby, you can take the free GSO tech. This is a very cheap and easy way to farm/exploit the charity tech's blocks (if you're very bored). Or just have a pair of GSO 1-blocks dropped from the sky, for giggles.


When in control of a cab-less tech: [Tab] key is locked out, as is build beam, [F], [G] amd obviously driving controls, but the anchoring button still works {Edited}.

You can optionally add an AI cab for 'spectator mode' (credit to @Legionite for that phrase, I think, after something similar happned in a CC stream, I think).

Alternative method (in R&D): turn the cab into an enemy after it falls off (to prevent reattachment), as already reported in this thread reply:

ZeroGravitas said:
Oh, good news @Zargn, there's still a way to get a cab-less (and anchorless) tech. Although probably no use to you, as any changes to it there-after cause destruction: remove last cab, set cab to enemy, Undo the disintegration (at ~24s in video below).

Edit: oh here, have a cab-less auto-snapshot of a pair of GSO 1-blocks. I've got quite a few to spare.

Also, you can create glitched, floating anchorable blocks using a controller-less tech:
This can be move around and left to float in there, but doesn't permit block attachment. I've added this as I wondered if it might help pin down a loophole in the code that affects other things in different ways. 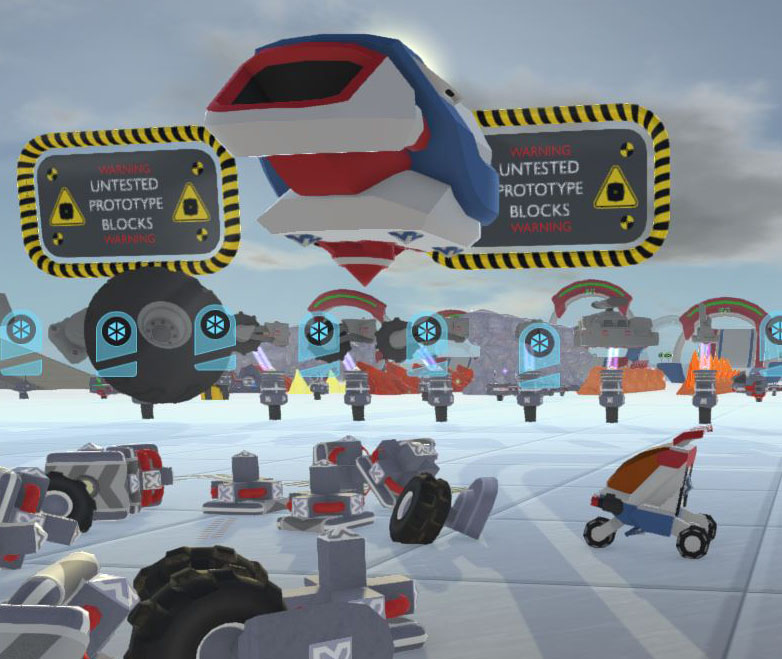 And another interesting bug arising from this: it can create loose blocks that won't get pulled in by SCUs:

It's happened for me after making a very large cab-less base tech, then having it disintegrate due to block damage from a small fall. I'd guess that the block not being picked up is one of those that took damage...


Snapshot used and output log (that might have other stuff happening too) attached. Save with unsuckable blocks from a previous test, also included (don't know if it'll re-load the problem).

Again, I posted this in case this behaviour is revealing any hidden code flaws; clearly not going to be a direct problem for players.

Thanks @ZeroGravitas , I'm only able to repeat this if I remove the block next to the cab to disconnect it, not by removing the cab itself. Is that what you found too? Cheers

Adriano said:
I'm only able to repeat this if I remove the block next to the cab to disconnect it
Click to expand...

Yes, that's what I meant by "pop it off"; clicking the cab directly is no good for causing this situation. (I should have been slightly more specific.)
Reactions: Adriano

Now isn't that great. I'm sitting in a tech with no cab in it. I somehow managed to do this by removing a block with a thing on it, removing my cab, then clicking undo. Maybe I should've tried to create a snapshot of the tech. I guess I will now.

Step 1: Remove Block with light on it.
Step 2: Remove cab without clicking undo.
Step 3: Click undo, and you have control of the tech.
Note: If you unanchor, you will die and respawn again.
"Broken" Tech snapshot shown. I suppose this is useful for building AI only stuff without having to stick your cab on the thing.

After several experimentation, here is a weird but interesting finding from me.

I'm now the venture AI module but unfortunately unable to control it.
Click to expand...

When I get a cab and switch to it, I cannot switch back to the AI module. Ofc...

I've merged @NotExactlyHero's new thread titled "[0.8.2] Controlling Techs Without Cabs" with this existing one on the same topic.

Thanks for the report and the extra information: so you don't need to 'pop off' the cab to get this to work. Just having (re)moved it in between breaking the tech and undoing it.

Do you want to have a GOOD time?

I'm now the venture AI module but unfortunately unable to control it.
Click to expand...

I got the same results as yours,but with the GSO Gruntle AI instead.
(Fun fact:They love to play fetch!)
Reactions: Galrex

ZeroGravitas said:
Also, you can create glitched, floating anchorable blocks using a controller-less tech:
This can be move around and left to float in there, but doesn't permit block attachment. I've added this as I wondered if it might help pin down a loophole in the code that affects other things in different ways.

But I can't really get this work. Did I miss anything? or has it been patched out?

Galrex said:
or has it been patched out?
Click to expand...